So, I saw a unicorn this week. There was nothing extraordinary about it – other than – ya know – it was a UNICORN! He looked sad though. I’m pretty sure it was because he had no name. 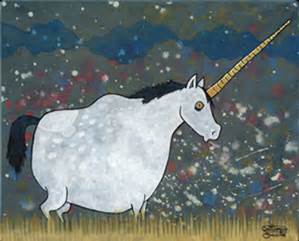 As you probably know, unicorns do not have names, indeed MUST NOT be named. If they are given a name, it causes them inner conflict in terms of self-awareness. For instance, if you name a unicorn Larry, he would become obsessed with pondering the essence of being Larry. For reasons we don’t entirely understand, all this introspection causes unicorns to become sedentary, and subsequently obese. And of course, obese unicorns lose their horn, and they end up looking like a fat horse.

So, if you ever see a fat horse, you have to wonder – could that be Larry the unicorn?