The infinite Monkey Theorem goes something like this: if there were an infinite number of monkeys typing, one of them would reproduce the entire works of Shakespeare. 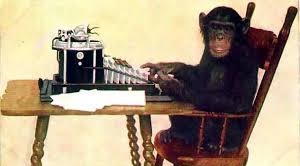 (I know - this isn't a monkey. It's a chimpanzee. Monkey is a common misnomer for chimp. I believe the theorem actually envisions a chimp, which would be much better suited for typing than a monkey.)

The Infinite Monkey Theorem was postulated by French mathematician Émile Borel in 1913. Similar theories were considered centuries earlier, but I’m sticking with Borel because – c’mon – monkeys typing. Plus, Borel and I share the same birthday.

A key word here is theorem; don’t be distracted by material realities. The theorem implies continuous and random typing. Monkeys would not type randomly, and they certainly wouldn’t keep at it very long.

In one university study, involving a group of monkeys, the alpha male eventually smashed his typewriter with a stone, and most of the others urinated and defecated on their machines. What little “typing” they did was mostly the letter “S”. That was English taxpayer money at work by the way.

But the monkeys are meant to be a metaphor for some device randomly typing. And the result can be ANY written work, or even – EVERY written work – THEORETICALLY.

Let me rephrase the theorem: If an infinite number of processes are enabled to produce random sequences of English letters, it will result in an exact reproduction of any specific written work already in existence. Borel’s wording is just more fun.

In theory, it would also produce an entirely new novel, play, or story to rival the works of Shakespeare, Dickens, Hemingway, or any writer, though the monkey or device would have no comprehension of what it produced.

And at that point, the argument is lost on a great many people. It is difficult to think in the abstract, particularly to this – infinite – extent. I’ve read arguments against the Infinite Monkey Theorem, that actually use the words “millions and millions of monkeys”. As if that is close to infinite.

Because let’s be honest, you don’t believe it; do you? I didn’t initially, but upon careful consideration, I am quite convinced it is true. The resulting Shakespeare text, and Dickens text, and Hemingway text are not probable – they are certain.

I believe, the difficulty in grasping infinity, is exactly why Borel came up with the theorem – to give us an idea of how unfathomable it is.

I am not a mathematician, but I’ve read the theorem is mathematically provable. But, if you change the parameters to just an extraordinarily huge number of monkeys, like the number of monkeys equals the number of atoms in the universe, and they were typing a quadrillion words a minute, for a trillion times the life of the universe, the probability they would produce even a single page of Shakespeare is unfathomably minute.

And I start, to just sort of, grasp infinite.

I also read a criticism that asserts the Infinite Monkey Theorem is irrelevant, which amuses me in a sad sort of way.

Thinking is not irrelevant.