This is installment 1 of 20, in The Pickwick Papers 180th anniversary readalong, hosted by Behold the Stars, and commencing in March, just as Dicken’s first installment was published. 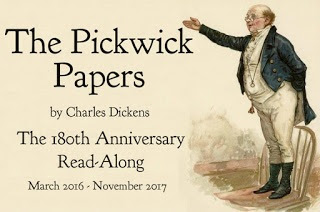 Chapter 1: Opens on a meeting of the Pickwick Club, London, May 12, 1827, in which a subordinate group to be known as The Corresponding Society of the Pickwick Club, is established for the imprecise purpose of….hmmm….how could I describe it. At this early point, I can only infer that the purpose is to pursue adventure and discovery and to record said adventures for posterity. The society will be headed by the Honorable Mr. Samuel Pickwick a man with a “gigantic brain”, apparent scientific passion, philosophic inclinations, and according to his own description “an observer of human nature”. Pickwick is to be accompanied by three friends: Mr. Tracy Tupman, Mr. Augustus Snodgrass, and Mr. Nathaniel Winkle. Each is known for one particular passion which is their unique distinction: Tupman for an admiration for the fair sex, Snodgrass as a poet, and Winkle as a sportsman. These four receive hearty approval and commission from their fellow Pickwickians, and appear set to head off for – well we don’t quite know where just yet, but certainly for the greater glory of The Pickwick Club.

The adventures begin predictably in chapter 2, which seems to indicate they will be comic adventures. The coachmen, conveying Pickwick to the appointed embarkation point, misconstrues Pickwick’s propensity of making notes of trivial observations, as recording the coachman’s number, presumably to inform on some misconduct. The coachmen starts a fight with Pickwick and his companions, which is broken up by a good natured stranger. The stranger becomes a ready companion, and the five proceed together to the next stop. The Stranger, not yet named, appears to be quick witted, worldly wise, and perhaps a bit of a rogue. He is able to quickly discern each of the traveler’s particular distinction. He makes use of this knowledge to entice Tupman’s amorous appetite and attend a ball that promises a fair selection of worthy ladies. The results are an insulted military officer, a challenge to a duel, and an absurd case of mistaken identity.

At the end of chapter 2, I’m left wondering the stranger’s name, wondering why none of the Pickwickians have asked for it, and wondering if the stranger will accompany them further, or if his advent will be a brief one.

So far, it’s quite entertaining, rather silly, great fun.
.
Posted by Joseph at 11:22 PM