The Count of Monte Cristo by Alexandre Dumas (70 down, 30 to go) 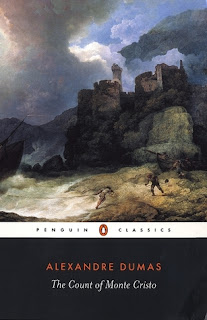 …for the wicked are not so easily disposed of, for God seems to have them under his special watch-care to make of them instruments of his vengeance.  ~ The Count of Monte Cristo

This is the second time I’ve read The Count of Monte Cristo, and the only work I’ve read by Alexandre Dumas. It is a realist novel, third-person narrative, a story of betrayal and revenge, taking place in France, 1815-1839.

This novel satisfies category five of the Back to the Classics Challenge 2016: Classic by a non-white author.
It was not intentional – I did not plan it this way – but historically the setting of The Count of Monte Cristo immediately follows the setting of my previous read, War and Peace. The plots are both influenced by Napoleon Bonaparte, though the setting switches from Russia to France. One major difference. War and Peace is historical fiction, while The Count of Monte Cristo is not, though it does contain some historical markers.

I first read The Count of Monte Cristo in high school, nearly 30 years ago – and I loved it. I thought it was brilliant. Of course, I hadn’t read much classic literature yet. I wondered what my impression would be with this reread.

I still loved it.

Though I did indeed have some very different feelings. I was a bit less enamored with the heroism of the title character, but a bit more intrigued by his complexity. In short, it is a thoroughly enjoyable read and a marvelous escape (pardon the pun).

Betrayal and Revenge: The betrayed is Edmond Dantès; the avenger is The Count of Monte Cristo - who are one and the same.

The setup, hooks you right away. The reader is introduced to Edmond Dantès. He has a promising career, just promoted to captain of a merchant vessel, with a kind and fair employer. Edmond is a devoted son, the pride and joy of his aged father, and engaged to the beautiful Mercedes. Everything is going Edmond’s way.

But unknown to Edmond, he has a few enemies: a rival for Mercedes affection and a shipmate jealous of Edmond’s promotion. Together they plot Edmond’s downfall, along with a faithless friend of Edmond’s who is too drunk and too cowardly to stop the scheme. Edmond is anonymously accused of being a Bonapartist and is arrested on the day of his wedding. His demise is completed by the King’s attorney who condemns Edmond without trial in order to conceal his own complicity in the Bonapartist movement. Edmond is sent to the dread prison, Chateau d’If.

Edmond loses nearly everything: his freedom, his career, his father, and his beloved Mercedes. He spends fourteen years in the prison, during which time his father dies and Mercedes marries his rival, though only after she believes Edmond dead, and completely ignorant of her husband’s role in Edmond’s demise.

But Edmond gains something in prison too. He befriends an aged Abbe, who gives him a classical education and also imparts to Edmond the location of a vast, buried treasure. A treasure the Abbe has full legal rights to. He offers to share it with Edmond if they ever escape. The Abbe dies in prison, but his death offers Edmond a chance for a daring escape.

Once free, and after careful steps to acquire the treasure, Edmond, appears incognito as the Count of Monte Cristo. He enters Parisian society and the lives of his old enemies. They of course have long forgotten Edmond, also believing him dead, and are captivated by the mysterious and generous Count, all part of Edmond’s brilliant plan. Only Mercedes, at least to the reader, appears to suspect the Count’s true identity. The Count weaves an elaborate plan to ensnare his enemies and exact his revenge – but of course, things – don’t always go exactly as planned, even for the singular Count.

Still there is a satisfying dose of poetic justice. Once this begins, the justice or the vengeance – the reader will have to decide which he believes it to be, the book is hard to put down.

And then, soul searching, regret, atonement, forgiveness, and above all – Hope!

I loved this tale as a teen, I think, because it was a daring adventure. The Count was magnificent and brilliantly cruel to those who were worthy of cruelty. I relished the Count’s justice, and regretted his clemency. He was a daring cavalier – fearing and respecting no one.

But with this reread, I loved it – for almost exactly the opposite reasons. At times, I shuddered at the Count's fierceness, and I was relieved by his mercy. I still liked the Count, still cheered for him, was satisfied when justice was served, but I recognized his arrogance more so than when I was a teen. The Count took too much upon himself. He imagined, or perhaps deluded himself, that he was the instrument of God’s justice. Most of the time I was unconvinced he was seeking impartial justice, but rather personal vengeance. At the height of his arrogance he says:

God needed me, and I lived.

I still thought the plot was genius.

SPOILER ALERT: The first read, I was disappointed that Edmond never won back Mercedes, disappointed they did not end up happily ever after. This time I still felt some regret for that, but felt the imperfect ending was more powerful as a poignant reminder that some evils cannot be put altogether right in this lifetime.

Dumas would have us believe the greatest of these is hope!

Revenge: I suppose revenge is a fairly common topic in fiction, but I’ve only read two where it is the predominant theme: Wuthering Heights, which I disliked, and The Count of Monte Cristo, which I loved. I felt that Wuthering Heights very nearly celebrated revenge as a perverse token of love, whereas The Count of Monte Cristo was an indictment on the ignobility of revenge.

…happiness is like the enchanted palaces we read of in our childhood, where fierce, fiery dragons defend the entrance and approach; and monsters of all shapes and kinds, requiring to be overcome ere victory is ours. ~ Edmond Dantès
Forgive, Edmond, forgive for my sake, who love you still! ~ Mercedes
Monte Cristo became pale at this horrible sight; he felt that he had passed beyond the bounds of vengeance, and that he could no longer say, “God is for and with me.”
He who has felt the deepest grief is best able to experience supreme happiness. ~ The Count of Monte Cristo

Film Renditions. I hope to watch the 1975 Richard Chamberlain version soon, and I’ll update this section when I do. A comment about the 2002 version however: Don’t bother. It completely misses the point.
.