The Two Gentlemen of Verona by William Shakespeare

The Two Gentlemen of Verona by William Shakespeare

The Two Gentlemen of Verona was one of Shakespeare’s first plays (THE first by some reckoning), written between 1589 and 1593. It is generally regarded as not among his best. It does however, set the stage (pardon the pun) for the Bard’s playwriting career. It is a comedy regarding two friends from, you guessed it, Verona, and a love quadrangle they become enmeshed in. 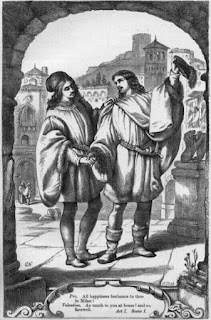 In short, the story goes like this:  Proteus and Valentine are best friends. Proteus loves Julia – who loves him in return; Valentine has no lover and is leaving Verona for Milan where he meets Silvia and falls in love. She also loves him, but Silvia is intended for a courtesan friend of her fathers. Proteus joins Valentine in Milan, falls in love with Silvia, conveniently forgets his love for Julia and his friendship for Valentine, and plots to win Silvia for himself. Silvia will have none of it and is disgusted with Proteus fickleness and unfaithfulness (rightly so, well judged Silvia, say I).

Proteus is kind of a scumbag, but this is a comedy. There are numerous intricate complications, all set right in the end – including Proteus remembering he loves Julia, and Julia being for too forgiving IMO.

I concur – not one of the Bard’s greater works.

I only caught one of those original Shakespeare phrases that is now part of English vernacular:

As plain as the nose on his face. Though, it was originally turned a bit differently – ironically: Oh jest unseen, inscrutable, invisible, As a nose on a man’s face, or a weathercock on a steeple