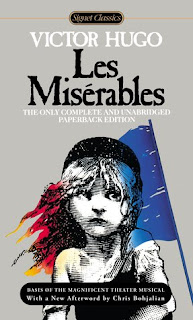 Jean Valjean wept for a long time. He wept burning tears, he sobbed with more weakness than a woman, with more fright than a child.

When you shall have learned to know, and to love, you will still suffer. The day is born in tears. The luminous weep, if only over those in darkness.

This is the first time I’ve read Les Misérables or Victor Hugo. The Romantic Period novel is the third-person narrative of Jean Valjean, a peasant in early 19th Century France, who is imprisoned for stealing a loaf of bread.

This novel satisfies category #4, a classic in translation, of the 2017 Back to the Classics Challenge.

A masterpiece. In the author’s words, Les Misérables is the tale of

…the march from evil to good

Jean Valjean is initially sentenced to five years in the galleys for stealing bread. Another 14 years is added for attempted escape. He serves his full sentence and is released, but…

Liberation is not deliverance. One gets free from the galleys, but not from the sentence.

Wherever Valjean traveled, he was denied lodging and food, even though he could pay. As a convict, he had to register with the police and show his passport which marked him as a convict. The news would spread and Valjean was offered no kindness.

Until he encounters Bishop Myriel – Christ-like Bishop Myriel. Valjean is stunned when the Bishop gives him food and shelter.

The Bishop, who was sitting close to him, gently touched his hand. “You could not help telling me who you were. This is not my house; it is the house of Jesus Christ."

Again, Valjean is stunned. Before he leaves, the Bishop admonishes him…

Do not forget, never forget, that you have promised to use this money in becoming an honest man.

Although, Valjean never really made any such promise. He stumbles on his way, trying desperately to understand this strange mercy – and more than mercy – grace.  (Mercy: unmerited clemency; Grace: unmerited favor)

You might expect Valjean to be a changed man at this point – he is only a troubled man.

Later, on a lonely road, he robs a child of a coin – perhaps out of habit. But then he stands motionless for hours brooding over his life. His darkened soul is finally touched by the compassion of Bishop Myriel.

Jean Valjean wept for a long time. He wept burning tears, he sobbed with more weakness than a woman, with more fright than a child.

He vows to indeed become an honest man – first by searching fruitlessly for the child in order to restore the coin.

And here begins Valjean’s march from evil to good.

It is not an easy road. He adopts a false identity, becomes an honest businessman, makes a fortune, and becomes the beloved, benefactor of his town.

But Valjean is forever dogged by zealous police inspector Javert. The course of the book is Valjean attempting an honorable and humble life, while avoiding Javert. Along the way, Valjean tries to help the pitiful Fantine. Oh, if only someone had pitied her. She is the victim of a cad who promised his love, got her pregnant, and then forsook her. She tries to make an honest living and care for her daughter Cosette, but like Jean Valjean – she finds little compassion.

What is this history of Fantine?

It is society purchasing a slave.

On Fantine’s deathbed, Valjean promises to care for Cosette. He rescues her from pitiless foster parents, and Valjean and Cosette live a life of assumed names, ever changing lodgings, and no friends. When Valjean does not feel the heat of inspector Javert, he is happy with Cosette, and she with him.

…he told himself that he really had not suffered sufficiently to merit so radiant a bliss, and he thanked God, in the depth of his soul, for having permitted him to be loved thus, he, a wretch, by that innocent being.

But there was always Javert. Javert was a rigid slave to duty – and the law. He had seen, or at least had opportunity to see on several occasions that Valjean was a good and decent man. He had paid his debt. His only guilt now was living under an alias – in order to live. It mattered not to Javert. Until…

Javert is stunned – when Valjean – the criminal – the fiend – shows him mercy. Javert cannot reconcile this. The following excerpts describe some of his inner turmoil.

Javert felt that something terrible was penetrating his soul – admiration for a convict. Respect for a galley-slave – is that a possible thing? He shuddered at it, yet could not escape from it.

…in the depth of his thought he had heard a voice, a strange voice crying to him: - “It is well. Deliver up your savior. Then have the basin of Pontius Pilate brought and wash your claws.”

Javert’s ideal, was not to be human, to be grand, to be sublime: it was to be irreproachable.

But how was he to set about handing in his resignation to God?

In my opinion, it is Javert, not Valjean, who is – le misérable.

Oh and…along the way, Cosette blossoms into a beautiful young woman. You know where that goes.

I have only one complaint with this book: it is unnecessarily long. Hugo makes frequent detours from the story, to describe in painful detail some trifle that is not essential to the story. What do I know? Hugo wrote a masterpiece, I write a blog, all that…all true, but…

Just one example: at one point, Valjean takes to the sewers to escape. Hugo then takes 6 chapters to describe the condition and history of Paris’ sewers. A couple of profound excerpts:

But still – 4 ½ stars, it’s brilliant, I’m glad to have read it. Have you read Les Misérables? What did you think?

Other excerpts (contains a spoiler):

Can the man created good by God be rendered wicked by man?
He loved books; books are cold but safe friends.
Breaking the gloomy bonds of the past is a mournful task.
It is very easy to be kind; the difficulty lies in being just.
…that grand human thing which is called the law, and that grand divine thing which is called justice.
War has frightful beauties which we have not concealed; it has also, we acknowledge, some hideous features.
Social prosperity means the man happy, the citizen free, the nation great.
Cosette had been beautiful for a tolerably long time before she became aware of it herself. But, from the very first day, that unexpected light which was rising slowly and enveloping the whole of the young girl’s person, wounded Jean Valjean’s somber eye. He felt that it was a change in a happy life, a life so happy that he did not dare to move for fear of disarranging something. This man, who had passed through all manner of distresses, who was still all bleeding from the bruises of fate, who had been almost wicked and who had become almost a saint, who, after having dragged the chain of the galleys, was now dragging the invisible but heavy chain of indefinite misery, this man whom the law had not released from its grasp and who could be seized at any moment and brought back from the obscurity of his virtue to the broad daylight of public opprobrium, this man accepted all, excused all, pardoned all, and merely asked of Providence, of man, of the law, of society, of nature, of the world, one thing, that Cosette might love him!
An observer, a dreamer, the author of this book…~ Narrative in which Hugo describes himself, his real-life experience being caught in the crossfire of the 1832 June Rebellion in Paris
Love is the folly of men and the wit of God.
He was dead.
The night was starless and extremely dark. No doubt, in the gloom, some immense angel stood erect with wings outspread, awaiting that soul.
What is the amount of truth that springs from your laws, and what amount of justice springs from your tribunals? ~ Victor Hugo

Film Renditions: Prior to reading the novel, I'd seen both the 2012 musical version starring Hugh Jackman, Russel Crowe, Anne Hathaway, and Amanda Seyfried, and the 1998 adaptation with Liam Neeson as Jean Valjean, Geoffrey Rush as Javert, Uma Thurman as Fantine, and Claire Danes as Cosette. I did not rewatch the musical, though I remember it being quite powerful. Still, I did not want to watch the musical because: a. it is a musical, and b. I didn't like the casting. I think the casting for the 1998 film is perfect and it was well acted. However, what I did not remember, it is not terribly faithful to the book. It can't be in 2 hours. I would accept some edits for the sake of time, but the happily ever after ending...not so much. So, I liked both in different ways, and disliked both in different ways. Skip the films, read the book.