The Gloria Scott and The Musgrave Ritual (Sherlock Holmes)

Last month I made a major find of a two-volume, illustrated, 1967 edition of The Annotated Sherlock Holmes – which contains all 56 short stories and four novels of the Sherlock Holmes canon. More about that HERE.

This collection puts all of the Sherlock Holmes stories into chronological order – not necessarily publication order. Dr. Watson as you probably know, is the fictional chronicler of the fictional Sherlock Holmes. As Dr. Watson recounted Holmes numerous exploits, they were sometimes out of order, as they only came to Watson as Holmes saw fit to tell them, particularly the earlier tales, before Watson and Holmes teamed up. So, these two short stories are the first and second cases that Holmes ever took.

The supply of game for London is going steadily up, Head-keeper Hudson, we believe has been now told to receive all orders for fly-paper and for preservation of your hen pheasant’s life.

After a few moments, Holmes decodes the message – realizing the true meaning is every third word, beginning with the first: The game is up…(I’ll let you play sleuth and decode the rest).

This isn’t a very satisfying case. No one is saved, no one is brought to justice, no crisis averted. It simply displays Holmes penchant for solving mysteries.

The second story is much better.

The Musgrave Ritual – some years later, after Dr. Watson has joined, and is living with Holmes, Sherlock pulls out a chest of old records. 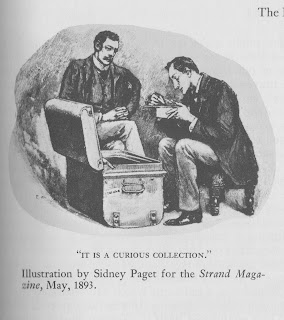 “These are the records of your early work, then?” I asked. “I have often wished that I had notes of those cases.”

“Yes, my boy; these were all done prematurely, before my biographer had come to glorify me.”


Similar to the first case, Sherlock comes to the aid of an old friend, who has a missing butler, a missing maid, and a mysterious family ritual that seems inexplicably tied to the missing persons. There still isn’t a great deal of justice, though one villain dies of his own devices. However, Holmes does discover a fantastic meaning to the “meaningless” family ritual and thereby recovers the long lost jeweled crown of Charles I.

Besides the entertainment of the case, Dr. Watson offers a fairly humorous narrative regarding Holmes untidiness:

Not that I am in the least conventional in that respect myself. The rough-and-tumble work in Afghanistan, coming on the top of a natural Bohemianism of disposition, has made me rather more lax than befits a medical man. But with me there is a limit, and when I find a man who keeps his cigars in the coal-scuttle, his tobacco in the toe-end of a Persian slipper, and his unanswered correspondence transfixed by a jack-knife in the very centre of his wooden mantelpiece, then I begin to give myself virtuous airs. I have always held, too, that pistol practice should distinctly be an open-air pastime;