Mighty Fitz: The Sinking of the Edmund Fitzgerald by Michael Schumacher

Mighty Fitz: The Sinking of the Edmund Fitzgerald by Michael Schumacher

The legend lives on from the Chippewa on down of the big lake they call Gitche Gumee. ~ Gordon Lightfoot from The Wreck of the Edmund Fitzgerald 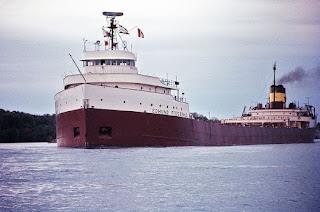 If you know anything about the S.S. Edmund Fitzgerald you probably learned it from the song The Wreck of the Edmund Fitzgerald by Canadian folksinger Gordon Lightfoot. However, the song is, in a few points, not quite accurate. This is by no means a criticism. Poets are entitled to creative license and much was still unknown about that fateful night of November 9-10, 1975 when Lightfoot penned his ballad. He filled in some of the blanks. A few items were later disproved – but this in no way diminishes the artistic value nor the labor of love that was Gordon Lightfoot’s hauntingly beautiful tribute to the 29.

My memory of the Edmund Fitzgerald or Mighty Fitz, predates the song. I spent the first 24 years of my life living in Michigan. This tragedy took place in my neighborhood and I remember this story as it unfolded. I’ve long been interested in the greatest shipwreck in Great Lakes history and I finally got around to reading one of the many books on the subject.

In short, I’ll say it’s a marvelous look into this story. It is personal at times, delving into the lives of some of the crew – and those they left behind like captain of the ship that was trailing Fitz when she “disappeared”. It is also technical, but accessible, going into the numerous investigations and commissions that attempted to discover the cause – an issue that will likely never be solved, as this wreck left no witnesses and no survivors. I won’t synopsize further, except with the following: a look at some of the lines from Lightfoot’s song that are correct, and those that are not.

As the big freighters go – Mighty Fitz was indeed bigger than most. The hull was 729’ by 75’, barely able to fit (length and width) into the Sault St. Marie Locks of that time. She was at one time a record holder for largest load to pass through the locks, and largest load for an entire shipping year.

She was bound for Detroit, not Cleveland.

The old cook almost certainly did not come on deck, and he didn’t have time to say “fellas, it’s been good to know ya”. Much is still disputed about the wreck, but one thing is clear: it was a nearly instantaneous catastrophe. Moments before “her lights went out of sight”, Captain Cooper of the S.S. Arthur M. Anderson, trailing a few miles behind, radioed the Edmund Fitzgerald and asked Captain Ernest McSorley “how are you making out?” Captain McSroley responded, “We are holding our own.” – the last words any human soul heard from anyone aboard the Edmund Fitzgerald. No one, not even her own Captain and crew, knew that “the good ship and crew was in peril.”

“Later that night when her lights went out of sight” is a particularly poignant line that I never quite understood before reading this book. Captain Cooper, who was trailing the Edmund Fitzgerald recalled that suddenly the Fitz was just gone from their radar, and that they could no longer see her lights.

They did indeed go down within 15 miles of the safety of Whitefish Bay.

Great Lakes Mariners refer to nor’easters on Lake Superior as “The Witch of November”.

“The church bell chimed ‘til it rang 29 times for each man on the Edmund Fitzgerald.” Father Ingalls of the Mariner’s Church in Detroit wrung the bell and then offered the following prayer:

“With thanksgiving to God for their courage and strength, for the benefits we have received from their labors and for the blessed hope of their everlasting life, we hereby gratefully remember all the mariners of our Great lakes who have lost their lives.”

I don’t understand the science exactly, but there is something about the frigid temperatures of Lake Superior and the effects it has on gases in the body, that prevents drowned bodies from floating to the surface. Lake Superior does indeed – not “give up her dead”.

Regarding the dead: In 1995 the Edmund Fitzgerald’s bell was removed from the wreck and placed in a museum. A replacement bell was installed on the wreck in the depths of Lake Superior with the names of the 29 lost seamen. It is their tombstone.

Email ThisBlogThis!Share to TwitterShare to FacebookShare to Pinterest
Labels: non-fiction