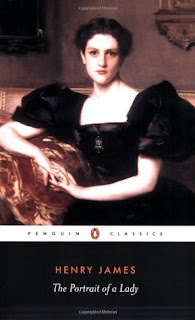 …a prodigy of learning, a creature reported to have read the classic authors – in translation. ~ narrative regarding Isabel Archer

This is the fourth novel I’ve read by Henry James and the first time I’ve read The Portrait of a Lady.  This story is a third-person narrative, realist novel set in late 19th Century England and Italy. It is the story of Isabel Archer, a charming and capable young American woman of little means, who is discovered by her wealthy, and slightly eccentric aunt, Lydia Touchett. It is of course then, the story of Isabel finding her place in the world.

This novel satisfies 2017 Back to the Classics Challenge category #1 – A Nineteenth Century Classic.

As I said, this is Isabel’s story, so I don’t want to spend too much time on her aunt – but her aunt’s situation is complicated. She’s an American expatriate splitting time between England and Italy with occasional jaunts to France or other European countries. She is married to a wealthy American expatriate who seldom leaves England. When Mrs. Touchett is in London, she lives under the same roof as her husband, but they do not live as husband and wife. They are civil, but that is all. Mr. Touchett is in poor health …his journeys were over and he was taking the rest that precedes the great rest.

They have a son, Ralph Touchett, who was born and lived most his life in England. He is in poor health as well, but is of a lively and intelligent spirit.

Mrs. Touchett takes Isabel to London. Mrs. Touchett, Mr. Touchett, and Ralph Touchett ALL adore Isabel. Everyone does. She receives two marriage proposals within a fortnight: one from an English Lord and another from a wealthy American businessman. She refuses both. One takes it graciously, but vows ever to love her. The other is less gracious but also vows to never abandon hope.

Mr. Touchett dies and leaves half his fortune to Isabel. This is Ralph’s idea, unbeknownst to Isabel. Ralph wants to be a spectator to Isabel’s life once she has the means to soar. Mrs. Touchett is unsurprised and indifferent.

If Isabel was attractive before, now that she is wealthy, she is of course even more fascinating to eligible bachelors. Her previous suitors who have not given up, are met with new rivals.

After traveling the world, Isabel makes a choice for a husband – but he isn’t everything the reader, or Ralph, or Mrs. Touchett, or some other friends of Isabel had hoped for.

And the rest – you must read for yourself.

I liked this MUCH better than my previous experiences with Henry James. This is one of his earlier novels, and according to some – one of his best. It is certainly much more accessible than his later novels. The prose is elegant, even beautiful at times but always easy to follow.

Such as this dialogue between Isabel and Ralph:

Isabel looked at him with serious eyes. “I wonder whether you know what’s good for me – or whether you care.”

“If I know depend upon it I care. Shall I tell you what it is? Not to torment yourself."

“Not to torment you, I suppose you mean.”

“You can’t do that; I’m proof. Take things more easily. Don’t ask yourself so much whether this or that is good for you. Don’t question your conscience so much – it will get out of tune like a strummed piano. Keep it for great occasions. Don’t try so much to form your character – it’s like trying to pull open a tight, tender young rose. Live as you like best, and your character will take care of itself. Most things are good for you; the exceptions are very rare, and a comfortable income’s not one of them” Ralph paused, smiling; Isabel had listened quietly. "You’ve too much power of thought – above all too much conscience,” Ralph added. “It’s out of all reason, the number of things you think wrong. Put back your watch. Diet your fever. Spread your wings; rise above the ground. It’s never wrong to do that.”

Or Isabel describing the young daughter of one of her suitors:

She was like a sheet of blank paper – the ideal jeune fille of foreign fiction. Isabel hoped that so fair and smooth a page would be covered with an edifying text.

Or narrative regarding a rejected suitor:

Verdi’s music did little to comfort him, and he left the theatre and walked homeward, without knowing his way, through the tortuous, tragic streets of Rome, where heavier sorrows than his own had been carried under the stars.

Or this conversation between a suitor, and the suitor’s advocate. The gentleman was handling a delicate porcelain cup as the two described Isabel:

Please be very careful of that precious object.It already has a wee bit of a tiny crack,

I am certain the “precious object” is a double entendre.

I have only one major complaint with The Portrait of a Lady and it’s the same complaint I’ve had with all my reading of Henry James. The author believes and wants his readers to believe EVERY character is absolutely fascinating. He tries to convince his readers via the assertions of other characters. The superlatives they use to describe one another, to one another, is never ending and in most cases unconvincing and therefore rather annoying. My complaint is less severe with this novel however, because a few of the characters were indeed quite fascinating, including a few I have not mentioned here.

That was meant to tempt you – as this is the first Henry James novel I can recommend. Or, have you already read The Portrait of a Lady? What did you think?

There is a delightful line regarding an Englishman who visits America:

(This made me chuckle…nice to know Americans are not the only ones perceived as having ethno-myopia.)

Synchronicity: Not long ago, I read, for the first time, William Shakespeare’s comedy The Tempest. Since then, I read in Vanity Fair where a character alludes to Caliban [villain in The Tempest] and now James does the same when Ralph makes allusions to Caliban and Ariel.

Funny little Angloisms I don’t really get: Two separate characters, in those superfluous attempts to convince me of the fascinating qualities of other characters, were described as being exceptionally well qualified at “ordering dinner”

Really? That’s a distinction? Like I said, I don’t get it.

Finally, just a nice reminiscence of places in Europe I’ve visited. While in Venice, Isabel visits the Bridge of Sighs. (A fitting melancholy name as it connects a prison, with interrogation rooms.) But it’s beautiful – like all of Venice.

Oh and - in spite of the title, and most covers you see, there is no record of Isabel having her portrait made.

“I like her very much. She’s all you described her, and into the bargain capable, I feel, of great devotion. She has only one fault.”
“What’s that?”
“Too many ideas.” ~ dialogue regarding Isabel

…it was an Italian fashion to commemorate the occasions of life by a tribute to the muse.

I don’t know whether I’m too proud. But I can’t publish my mistake. I don’t think that’s decent. I’d much rather die. ~ Isabel