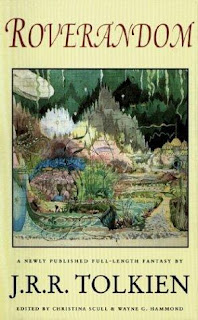 Roverandom is a children’s fairy tale about a dog who is turned into a toy dog by a Wizard. Tolkien wrote this story for his second eldest, Michael, when Michael’s toy dog is lost during a family vacation.

The tale begins when Rover bites the wizard Artaxerxes in the seat of the pants. Artaxerxes had it coming as he took a ball that Rover was innocently playing with, but the wizard – known as something of a curmudgeon – is unconcerned with the justice of the situation and spitefully turns Rover into a small toy dog.

Rover experiences a series of adventures as he tries to find Artaxerxes to convince him to change him back into a real dog. Rover is adopted by a young boy, but the boy quickly loses his new toy at the beach, exactly as Michael Tolkien lost his cherished toy dog that inspired this story.

Rover’s adventures take him to live for a season with the man in the moon. The man in the moon, a wizard himself, renames Rover to Roverandom, to avoid confusing him with his own dog Rover. Roverandom is eventually sent back to earth, but now to live under the sea with Artaxerxes who has become PAM – Pacific and Atlantic Magician, and yet another dog named Rover. Artaxerxes seems less annoyed with Roverandom, but usually too busy to listen or help. Eventually however, he changes Roverandom back into a real dog and all ends well.

Rovernadom is nothing like the epic fantasies we are accustomed to from Prof. Tolkien. It is silly, whimsical, never terribly scary, and ever hopeful. If you have children or grandchildren Roverandom, along with Mr. Bliss, would make excellent introductions to Tolkien, before moving on to scarier tales like The Hobbit.