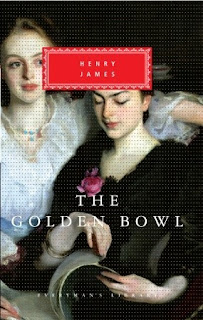 This is the third novel I’ve read by Henry James and the first time I’ve read The Golden Bowl. It is a third-person narrative, realist novel, set in turn of the 19th Century, Western Europe, mostly England. It is the story of a bizarre love quadrangle between an Italian Prince, his American heiress bride Maggie, her widower father Adam Verver, and Charlotte Stant, a friend of Maggie’s, previous paramour of the prince, and now – by the arrangement of Maggie – bride of Maggie’s father.

I disliked this novel even more than my previous experiences with James [The Ambassadors and The Wings of the Dove]. If it were not for my quest and self-imposed rules, I would have abandoned this novel. I’m going to give James one more chance though and I’m holding out a little hope. Thus far, I’ve only read from James latest writing period. He is known for periods with distinctly different styles: James I (1881 and earlier), James II (1882-1900), and The Old Pretender (1901 and later). All three James’ novels I’ve read are from his last period and The Golden Bowl is the culmination in that period.

His writing during this period has been described as difficult and unnecessary. I concur. Rumor has it that James’ earlier works are much more accessible. So, perhaps I will like The Portrait of a Lady, from James I, a bit more.

I’m so glad to be done with this book that I don’t have much interest in blogging about it. However, I feel I should offer at least some defense of my criticism. My dislike of this novel is not merely about style. James’ characters, through narrative, stream of consciousness and dialogue, express views filled with paradox, hyperbole, vague allusions, and perplexing metaphor. I think it is intended to make them seem complex and philosophical. In my opinion, they are simply absurd and pretentious. Such as:

She talked now as if it were indicated, at every turn, by finger-posts of almost ridiculous prominence, she talked again as if it lurked in devious ways and were to be tracked through bush and briar; and she even, on occasion, delivered herself in the sense that, as their situation was unprecedented, so their heaven was without stars. “Do?” she once had echoed to him as the upshot of passages covertly, though briefly, occurring between them on her return from the visit to America that had immediately succeeded her marriage, determined for her by this event as promptly as an excursion of the like strange order had been prescribed in his own case. “Isn’t the immense, the really quite matchless beauty of our position that we have to ‘do’ nothing in life at all? – nothing except the usual, necessary, everyday thing which consists in one’s not being more of a fool than one can help. That’s all – but that’s as true for one time as for another. There has been plenty of ‘doing,’ and there will doubtless be plenty still, but it’s all theirs, every inch of it; it’s all a matter of what they’ve done TO us.” And she showed how the question had therefore been only of their taking everything as everything came, and all as quietly as might be. Nothing strange surely had ever happened to a conscientious, a well-meaning, a perfectly passive pair: no more extraordinary decree had ever been launched against such victims than this of forcing them against their will into a relation of mutual close contact that they had done everything to avoid.

There were two things I liked, that saved this from a 1.5 star rating. One of the four major characters fights to save both marriages, and is indeed successful. The second thing I liked is the title. There is a double entendre in the title. In the story there is an antique, flawed, golden bowl that plays a role in the turning point in this novel. The title is also derived from Ecclesiastes 12 verse 6 (verses 7 and 8 added for context):

Remember HIM before the silver cord is broken and the golden bowl is crushed, the pitcher by the well is shattered and the wheel at the cistern is crushed; then the dust will return to the earth as it was and the spirit will return to God who gave it. "Vanity of vanities," says the Preacher, "all is vanity!"

The writer (Solomon) is imploring the reader to remember HIM (the Lord) before life is over. The silver cord is the spine, the golden bowl is the head and brain, the pitcher by the well is the lungs, and the wheel is the heart. Solomon warns that all these will fail - we should remember the LORD before it is too late.

I'm glad to be done with this one. Have you read Henry James or The Golden Bowl? Did you like it any better than I?

Film Rendition: I watched the 2000 version with Jeremy Northam and Uma Thurman. It was true to the book, well cast, and well acted. I disliked it as much as the book.