The Charterhouse of Parma by Stendhal (92 down, 8 to go) 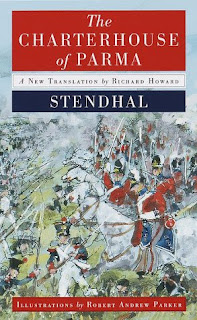 …it seems that nature has not granted me a heart with which to love and be melancholy; I cannot raise myself higher than vulgar pleasures, and so on. ~ Fabrizio del Dongo

The Charterhouse of Parma is a tale of romance, confounded by political intrigue, treachery, and adventure, wherein Stendhal pries into the psyche and soul of the young hero.

The hero, Fabrizio del Dongo, an Italian nobleman who, upon coming of age, runs off to join the cause of Liberté as he almost manages to enter Napoleon’s army. It’s all over before Fabrizio can truly enter the fray, but this adventure begins a lifelong sequence of right-place, wrong-time scenarios, and vice versa.

Fabrizio is intelligent though initially uneducated, honest, charming, and good looking, but in spite of this, I didn’t quite find him worthy of my sympathy, and this is the one weakness in the story for me. Fabrizio is also fickle, occasionally ungrateful, and impetuous bordering on reckless – no, he is outright reckless at times with his own life and with others’.

Nonetheless, it is an exciting tale reminiscent of The Count of Monte Cristo. The prose is affective and accessible, partial credit to the translator. Stendhal was an early practitioner of realism, when most of his contemporaries wrote in the Romantic style. I haven’t seen it labeled thus, but I would also call it a coming of age tale. There are also elements of Fabrizio that seem to be modeled after Stendhal himself, who like Fabrizio served in Napoleon’s army.

This rating, just above the median on my scale, means I liked it, but didn’t love it. I intend to read more by this author, probably The Red and the Black. Have you read Stendhal or The Charterhouse of Parma? What did you think?

We must confess that, following the example of many serious authors, we have begun our hero’s story a year before his birth. ~ Narrative reference to Tristram Shandy

As after a great storm the air is purer, so Fabrizio’s soul was tranquil, happy and, so to speak, refreshed.

“I was in love with love”, he wrote to the Duchess; “I did everything possible to gain knowledge of it, but it seems that nature has not granted me a heart with which to love and be melancholy; I cannot raise myself higher than vulgar pleasures, and so on.” ~ Fabrizio del Dongo

I am inclined to think that the immoral delight Italians experience in taking revenge is a consequence of their power of imagination; people of other countries do not, strictly speaking, forgive; they forget.