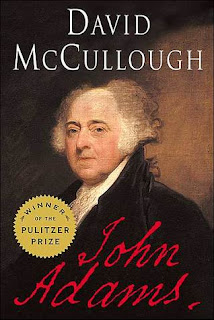 It’s a bit unfair to begin so; David McCullough’s Pulitzer Prize winning biography is about MUCH more than the election of 1800. But the election chapters had a sad familiar ring.

I don’t read a lot of non-fiction, and when I do, it is more of a discipline than a pleasure, but reading John Adams was a pleasure. There were times, when I couldn’t put it down. I’m not sure how McCullough pulled that off. It is certainly testimony to his talent as a writer, historian, and biographer, but I think it is also has something to do with his subject.

I’ve read biographies for a number of founding fathers, and all of those who served as President. In my opinion, John Adams is the most extraordinary, of the highest integrity. Indeed, his integrity likely cost him the election of 1800: caught between the Francophile Republicans and war-hawk Federalists – satisfactory to neither – Adams was steadfastly desirous of peace, and unflinchingly prepared for war.

Of those election vices, I mention at the beginning – John Adams was the bigger man. He could hardly be said to have campaigned at all. Years later he would lament over that, and subsequent elections:

Our American chivalry is the worst in all the world. It has no laws, no bounds, no definitions; it seems to be a caprice.

In the end, Adams lost the election, but won the peace.

The second such achievement of his career, for in the Revolution, if Washington won the war, Adams and Franklin won the peace. It was almost comical, how Adams and Franklin – who respected but didn’t exactly like one another, played the British against the French, who neither respected nor liked each other – to negotiate a peace treaty that was remarkably favorable to the new United States of America.

There is so much more besides the revolution and presidency. I think the most interesting points are Adams’ relationships: A long, tested, tried, cooled, and restored, friendship with Thomas Jefferson; a challenging productive collaboration with Benjamin Franklin; a quiet respectful relationship with George Washington; an ever cautious familiarity with Alexander Hamilton; his love, pride, and disappointment for his children, and above all others, the relationship between John and his most trusted advisor, most faithful supporter, and greatest friend Abigail.

In one of hundreds of letters he wrote her over the years, John called Abigail

…my dearest, worthiest, wisest friend in this world…

In another he wrote:

I must now repeat this with zeal and earnestness. I can do nothing without you.

And while the relationship between John and Abbigail is the triumph their life, the final chapter of John Adams’ life is beyond extraordinary. If it were the work of fiction, it would be discredited as ridiculous.

As the 4thof July, 1826 approached. John Adams 91, and Thomas Jefferson 84 were seriously ill. At Monticello Jefferson, heavily sedated passed in and out of consciousness for several days asking if it was the Fourth. In the early morning of the 4th, he learned the joyous day had arrived, and quietly died in the early afternoon. Hundreds of miles away in Massachusetts, with no means of knowing the fate of his old adversary and older friend, John Adams whispered…”Thomas Jefferson survives.”, and a few hours later John Adams also lie dead.

That John Adams and Thomas Jefferson died on the same day, on the 4thof July, on the 50thbirthday of the nation, President John Quincy Adams opined, that it could not be coincidence, but that it was a “visible and palpable” manifestation of “Divine favor”

John Adams was a prolific reader of Greek philosophers, Roman Statesmen, lawyers, doctors, scientists, and clergymen. But he also liked a bit of fiction, including Don Quixote, and the novels of Walter Scott and James Fenimore Cooper.

Quotations, all by John Adams:

When asked by lifelong friend Benjamin Rush if America would succeed in the Revolution, Adams replied…

Yes, if we fear God and repent our sins.

Opining on the role history would assign to Franklin and Washington

…that Dr. Franklin’s electrical rod smote the earth and out sprung General Washington. That Franklin electrified him with his rod and thence forward these two conducted all the policy, negotiation, legislation, and war

Reason holds the helm, but passions are the gales.

Great is the guilt of an unnecessary war.

His benediction, after his first night, in the not yet completed President's House in Washington City:

I pray heaven to bestow the best of blessings on this house and all that shall hereafter inhabit. May none but honest and wise men ever rule under this roof.

I find my imagination, in spite of all my exertions, roaming in the Milky Way, among the nebulae, those mighty orbs, and stupendous orbits of suns, planets, satellites, and comets, which compose the incomprehensible universe; and if I do not sink into nothing in my own estimation, I feel an irresistible impulse to fall on my knees, in adoration of the power that moves, the wisdom that directs, and the benevolence that sanctifies this wonderful whole.

There is a very good mini-series based on this biography...but of course, the book is better.