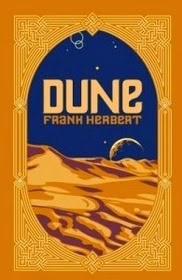 A World is supported by four things…the learning of the wise, the justice of the great, the prayers of the righteous and the valor of the brave. But all of these are as nothing…without a ruler who knows the art of ruling.

This is the first time I’ve read Dune or Frank Herbert. The book is a Science Fiction novel about warring factions of a distant galactic empire.

This novel satisfies square I3 of 2015 Classics Bingo: Sci-Fi or Horror Classic

Warring faction of a distant galactic empire may sound familiar. Indeed Dune reminded me a great deal of Star Wars and Ender’s Game. More precisely, Star Wars and Ender’s Game are very reminiscent of Dune. I don’t read a lot of Sci-Fi, but I am told many other Sci-Fi works borrow heavily from Dune. The novel stands alone as a story, but is also part of the Dune Universe (Duniverse), including sequels by Herbert, prequels by his son Brian Herbert and Kevin J. Anderson, another sequel by Bryan Herbert and Anderson based on Frank Herbert’s notes, and fan fiction.

Based on my rating, you should know I loved this book. Just as The Lord of the Rings is the Gold Standard of the fantasy genre, so Dune is the Gold Standard of Sci-Fi. I read the last half of the book in two settings; couldn’t put it down (though technically, I did put it down, two settings after all, but if not for a day job I would have kept going).

You may think I’m making this up, but I found the following quotation AFTER I wrote this review. Frank Herbert’s son Bryan speaking of Dune:

It is to science fiction what the Lord of the Rings trilogy is to fantasy, the most highly regarded, respected works in their respective genres.

The novel is a little difficult to follow at first. There are a lot of strange words and names, sometimes with only contextual clues as to meaning, but eventually things become clear. The noble Duke Leto Atreides is taking his concubine Jessica and son Paul from their home planet, a comfortable place much like Earth, to a dismal planet called Arrakis, a planet where water is extremely scarce, where the planet yields the valuable melange spice, and where giant worms that eat man and machine make harvesting the spice extremely hazardous. The Duke is sent by the Emperor to govern Arrakis, and to replace the ruthless Baron Harrkonen, but there are suggestions the Emperor has ulterior motives and treachery is suspect from numerous directions. Of course, there are the natural hardships and hazards of the planet and an indigenous population that is not fond of any Imperial representative.

The Dukes loves the Lady Jessica, but does not marry her, in order to foster false hope in other royal families that a union with the house Atreides is possible.  Jessica seems to understand and even approve. She is a member of a mysterious religious sect, known as the Bene Gesserit, and her son Paul is trained in the arts of the religion, ordinarily restricted to females. There is speculation that Paul may be a special child, and the fulfillment of an ancient prophecy. He is trained in physical combat, military tactics, and high level thinking.

When the family gets to Arrakis, the speculation surrounding Paul grows, and some factions see him as a savior, while others view him as a potential threat. And that of course, is the central theme of the story. Arrakis is a terrible, dismal place, yet it is the source of the most valuable substance in the universe. It has been a battleground for generations, but there is hope and fear, that Paul may change the course of history on Arrakis and of the Empire.

Dune is without doubt of the Sci-Fi genre, but there is an element of fantasy as well. In spite of both Sci-Fi and fantasy though, it reads more like simple human drama: love, loyalty, courage, greed, and ambition. It does have obligatory spaceships, energy weapons, and snarly space beasties, but the only sentient beings are human. I think that’s a masterful bit of writing to make Sci-Fi, something more than just fantastic technology and bizarre monsters.

As I stated there were numerous elements that reminded me of Star Wars. The Bene Gesserit, are very Jedi-like.  The adherents have insight on the thoughts, truthfulness, and motivation of others, prescience of certain events, a collective awareness shared with other members, and they can command others to do their bidding with simple voice commands.  They are said to use a force, but that force is split between a force that gives, and a force that takes. Yeah…see what I’m talking about. And there is the spice planet. At some obscure point somewhere in Star Wars, I am certain there is reference to spice wars. The comparison to Ender’s Game is obvious at the beginning: the young prodigy, possibly the child of prophecy, to be taken from his home world to save the galaxy. I’m sure other Sci-Fi works have drawn from Dune as well. The 60’s TV show Get Smart wasn’t exactly Sci-Fi, but they have a cone of silence for discussing sensitive things, and this could have been borrowed from Dune. In one scene two statesmen enter a cone of silence to protect their private discussion.

I enjoyed Dune immensely. If not for my quest, I’d be reading the next in the Dune series now. If you are not ordinarily a fan of Sci-Fi, you might want to stretch that comfort zone and give Dune a read. I highly recommend it.

Film Rendition: I'd heard pretty bad things about the 1984 film and it certainly lived down to the reports. I kept thinking what it would be like to watch the film without having first read the book. I believe I would have thought it was one of the stupidest and nonsensical films I'd ever watched. Skip the movie, read the book. I understand the 2000 mini-series is better. But, I think I'll skip that.