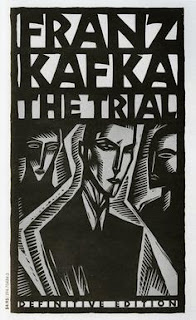 This is the first time I’ve read The Trial or Franz Kafka. It is a modernist era novel, allegorical, existential, and I'd say somewhat satirical. A precise time or place is never set, but a few clues suggest Northern Europe, early 20th century. Other elements are similarly vague such as the main character, Josef K., whom the omniscient narrator refers to simply as K. The lack of detail is probably an intentional device of the author to make the underlying meaning of the allegory relevant in any generation or culture


This novel satisfies square I4 of 2015 Classics Bingo: Translated Classic

Several factors tempered my experience. First, I didn’t realize it was an allegory (it is not universally believed to be so, but I am convinced) until well into the story and this left me confused in the beginning. Second, I’d read a synopsis about a man arrested by agents of an unknown jurisdiction who is brought to trial on unspecified charges by a mysterious and aloof authority. I was expecting a mystery, crime drama, maybe magical realism, but of course my expectations were never met. To be fair, I need to reread The Trial, and I will someday. I think a better understanding at the beginning will lead to a better overall experience. Finally, certain portions are incomplete. One chapter ends with the publisher’s note: “this chapter was left unfinished.” No reread will ever solve that.

The story is compelling from the very beginning. Josef K. is arrested, but the charges, proceedings, rules of evidence, etc. are all very vague. For instance, K. is told he must not fail to appear in court, but he is not given the precise time or place. This is all confusing, but what was maddening was K.’s resignation to the process as if it was all quite normal. That all made better sense when I realized the story is an allegory.

I think the major theme is fairly obvious: guilt, and ultimate responsibility for that guilt to an unseen authority. That’s probably not a very popular message today, but I thought it was an astute and telling commentary on the human experience. The story is rife with symbolism and caricature. In spite of what many would call a religious message, there is very little reference to any specific organized religion.

"Only the highest judge" can give absolute acquittal, but his court is "quite out of reach for you, for me and for all of us."

Apparent acquittal gets the defendant off the hook temporarily by the assertion of innocence of influential persons, but the defendant will one day assuredly be brought up on new charges. Deferment, is the process of unceasing motions and procedures simply meant to put off judgement indefinitely.

Of course, these circumstances are ludicrous on the temporal plane, but in an eternal and spiritual context have more meaningful implications.

I have not studied Kafka’s personal life in any detail and it would be grossly unfair of me to attempt to explain his world view, though I believe The Trial gives the reader a glimpse. On certain points, it certainly resonates with me, while on others…particularly the conclusion of the matter, my own belief is as different from Kafka’s as hope is from despair.

Film Rendition: The 1962 film starring Anthony Perkins as Joseph K is a pretty faithful rendering. If anything it was even more maddening. I think if I had watched it without reading the book I would have been completely lost.