Are You My Mother written and illustrated by P.D. Eastman – Guest book review by my Grandson Andrew 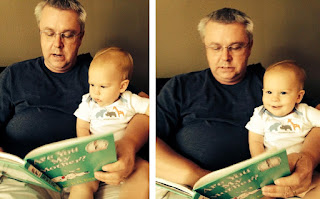 I was blessed recently to spend some time with my Grandson Andrew, and he was desirous to add another book review, to his previous submissions. The following is Andrew’s review of Are You My Mother, by P.D. Eastman. It so happens, the pictures and the story reading took place on Andrew’s first birthday.

Andrew wishes to express, Are You My Mother is ostensibly the heart touching search, of a little bird, for his mother. Andrew says that happenstance or fate, the reader may decide, leads to the eventuality that a mother bird leaves the nest in search of food, only moments before the young bird emerges from the egg.

Andrew found this a bit unnerving, frightening even, as his own birth was so very recent and it caused him great sympathy for the fledgling to be thrust upon the world without the immediate and loving care of its mother. Andrew does not really remember his birth, but he encounters new experiences weekly, and shudders at the thought of facing the unknown without his mommy. 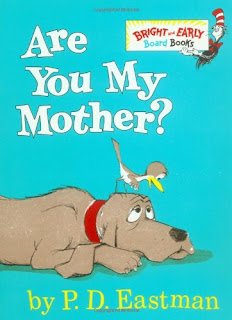 But that is the circumstance, and though Andrew felt birdy’s pugnacity under these circumstances was a bit contrived, the story was compelling enough as birdy embarks upon a quest to find his mother. He chances upon a kitten, hen, dog, and cow, asking each if they are his mother. Andrew, knows little  of the entire “circle of life” motif and predator/prey relationships of certain species, yet he still felt rather uneasy when birdy was questioning the kitty.

Reaching no satisfaction, birdy eventually asks a boat, plane, and an ambiguous “big thing” if they were his mother. At a critical juncture birdy seems to ask the cosmos – Do I have a mother?

Birdy eventually finds his mother, and all ends happily. As mentioned, Andrew felt this story was a bit scary. It made him sad when birdy did not even know if he had a mother. This was incomprehensible to Andrew, as his own mother is loving and devoted. He could not fathom facing life’s challenging moments without her. He was certainly relieved when birdy found his mother.

Andrew felt, the entire story was very likely allegorical, representing mankind’s search for the creator. The mother bird, the giver of life, clearly representing the creator. Andrew reminds us that birdy once exclaimed: do I have a mother? poignantly illustrative of the universal human pathos regarding our own creator. Andrew commends the author for delivering a succinct and affirmative answer to the age old question. Andrew finds all other contingencies rather untenable.

Andrew likes P.D. Eastman’s illustrations, though the doggie, pictured on the cover, left him a bit melancholy. Ordinarily Andrew thinks doggies are just about the funnest things he has encountered, though he is inclined to submit, there is a good deal in God’s great creation that he has yet to experience.