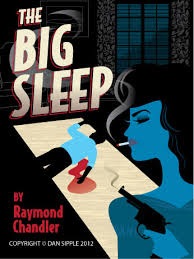 "What did it matter where you lay once you were dead? In a dirty sump or in a marble tower on top of a high hill? You were dead, you were sleeping the big sleep…" ~ Philip Marlowe

This is the first time I’ve read The Big Sleep or Raymond Chandler. The novel is the first in Chandler’s detective series about private detective Philip Marlowe. It is a hardboiled (that’s actually a genre…I didn’t know that), crime and/or detective novel, set in late 1930s Los Angeles.

I’m a bit surprised to find this on any top 100 novels list. I’m probably biased, but I don’t consider the detective genre great literature. I consider it more of a guilty pleasure. There’s nothing wrong with that, and perhaps this is the gold-standard of the genre. Personally, I find it a stretch to compare this novel, or the genre, with the classics I’ve read thus far – even those I’ve disliked. It just doesn’t seem to be the same level of achievement.

As far as a guilty pleasure though, it was a fun read. Philip Marlowe is the quintessential hardboiled detective. I can imagine Bogey speaking every line uttered by Marlowe, such as:

I sat down on the edge of a deep soft chair and looked at Mrs. Regan. She was worth a stare. She was trouble. She was stretched out on a modernistic chaise-lounge with her slippers off, so I stared at her legs in the sheerest silk stockings. They seemed to be arranged to stare at. They were visible to the knee and one of them well beyond. The knees were dimpled, not bony and sharp. The calves were beautiful, the ankles long and slim and with enough melodic line for a tone poem. She was tall and rangy and strong-looking. Her head was against an ivory satin cushion. Her hair was black and wiry and parted in the middle and she had the hot black eyes of the portrait in the hall. She had a good mouth and a good chin. There was a sulky droop to her lips and the lower lip was full.

The case starts out as a simple blackmail case, the client a dying millionaire, but of course there is more to the case than meets the private eye: murder, a string of murders, kidnapping, pornography (as in illegal in the 30s), and more extortion. Anything more would be a spoiler and if you have a long plane trip, or a short weekend – you could do worse.

In spite of the sordid topics above, the novel is PG-13 at worst.

Marlowe, the cops, the thugs, and the dames use a lot of slang. It’s kind of fun and usually pretty easy to infer the meaning from the context.

Excerpts: Just one other example of Marlowe’s cynical, tough-guy dialogue, describing the same “twist” as in the previous excerpt:

She’d make a jazzy week-end, but she’d be wearing for a steady diet.

Film Rendition: 1946 version starring Humphrey Bogart and Lauren Bacall is a pretty faithful adaptation. Hollywood has Bogey and Bacall’s characters fall in love in the end, which didn’t happen in the book. It also lacked Marlowe’s colorful narrative. But overall it did a good job of capturing the feel of the novel.