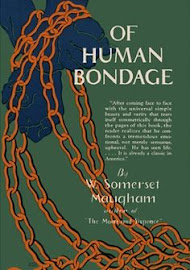 This is the first time I’ve read Of Human Bondage or W. Somerset Maugham. The novel is a modernist, existential, third-person narrative, coming of age tale of Philp Carey, turn of the 19th century, England. Maugham insisted the novel was not an autobiography, but it clearly has autobiographical elements.

The story begins in 1885 England; nine year old Philip is left orphaned when his mother dies only months after his father. Philip, born with a club foot, is sent to live with his Aunt Louisa and Uncle William, the Vicar of Blackstable.

In some ways it was similar; in many more it was quite different.

Philip’s aunt and uncle have no children of their own and live rather modestly. They accept Philip without regret. Both seem a bit intimidated by this unfamiliar task, but Aunt Louisa is a simple and saintly woman who comes to love Philip as her own. The Vicar accepts his duty as more of – well as a duty. He is not unkind, but neither is he particularly tender or loving.

Philip is immersed in the Vicar’s theology, and accepts it with childlike faith. This faith is brought to a tragic test, when Philip asks his uncle about the promise of scripture that Christ will answer the prayers of believers even if they ask to move mountains. The Vicar gives a trite answer that of course it’s true if Christ said it. Philip takes it to heart…

And tonight he sank on his knees; buried his face in his hands, and prayed to God with all his might that He would make his club-foot whole. It was a very small thing beside the moving of mountains.

Philip goes blissfully to sleep, assured that he will be healed in the morning. Of course, he is bitterly disappointed. This begins a lifetime of doubt and searching for Philip. Lifetime is a bit of an overstatement; the novel ends with Philip approaching 30.

But at this point, he’s still a child, and as you can imagine he suffers cruelty and exclusion for his deformity. He still gets by fairly well, is studious and resourceful, makes a few friends, and faces a modest but fairly comfortable future.

Philip throws away several promising opportunities, lives as if there is no tomorrow, loves as if – to be honest – as if he is an utter fool.

Oh I know, it’s a quaint and romantic notion to be a fool for love…not this sort of fool, and not this sort of love. Philip develops an inexplicable passion for Mildred a woman who doesn’t have half his intellect, no grace, is not particularly attractive, and treats Philip with disdain. She repeatedly makes a fool of Philip. Each time he swears her off forever, only to crawl back to be made a fool again.

The story seems to attempt to portray two different paths, and somehow tie them together: Philip's self-torturing love life, and his inner turmoil to find meaning in life.

He goes through several career attempts, including study of art in Paris. He eventually settles on his father’s profession and studies medicine. All the while, his world view continues to evolve. Eventually, at moment of personal crisis he concludes:

…the history of man in a single line; it was this: he was born, he suffered, and he died. There was no meaning in life, and man by living served no end. It was immaterial whether he was born or not born, whether he lived or ceased to live. Life was insignificant and death without consequence. Philip exulted, as he had exulted in his boyhood when the weight of a belief in God was lifted from his shoulders: it seemed to him that the last burden of responsibility was taken from him; and for the first time he was utterly free.

Oh life, where is thy sting?

This comes when he is on the very edge or ruin, penniless, jobless, homeless, nearly friendless, and hungry, yet he finds peace and comfort in the revelation. And slowly, things begin to improve.

There’s a good deal more; as things improve in the daily act of living, Philip’s love life finds an unexpected and satisfying turn – though not before coming to crisis.  As I said, I think Maugham intended a parallel perspective between Philip’s love life and existential angst, but for me it didn’t work.

I’ll admit I am biased. I reject Philip’s worldview outright. His epiphany, the moment of sublime peace was not at all satisfying to me. On the other hand, I was thrilled with the turn his love life took. I don’t think the two were incongruous, but I certainly didn’t feel one validated or enabled the other. In fact, this seemed a bit stilted to me, as if Maugham were trying to convince the reader, or maybe himself…see, an atheist can find love and happiness too. All is needed is to despair of meaning. I’m sure that’s not a fair representation, but that is the point. Maugham did not validate his worldview for me.

However, I still give Maugham high marks. This is a thought provoking novel. He enabled me to understand Philip’s worldview and how he got there. Philip’s uncle, practiced a sad form of Christianity…the only version to which Philip was exposed. I could believe how it would drive Philip away.

As I said in the beginning, it is a coming of age tale. It is very nearly a Künstlerroman, or story of an artist’s coming of age, ala Dickens' David Copperfield or Joyce’s A Portrait of theArtist as a Young Man.

…he was beginning to realize that he was the creature of a God who appreciated the discomfort of his worshippers.

From old habit, unconsciously he thanked God that he no longer believed in Him.

He still looked upon Christianity as a degrading bondage that must be cast away at any cost...

It seemed to him that all his life he had followed the ideals that other people, by their words or their writings, had instilled into him, and never the desires of his own heart.

Film Rendition: 1934 version starring Leslie Howard and Bette Davis only told half the tale: Philip's love life. It didn't touch on his philosophical journey. What it covered was pretty faithful, though it also skipped all of Philip's childhood. Embarrassing confession: I've never watched a Bette Davis film before this. Davis was convincingly horrible as Mildred, Howard was convincingly weak as Philip (pretty much the same character as his Ashley Wilkes weakling in GWTW), and Frances Dee was perfectly charming as Sally. So, marvelously cast, but only partially faithfully executed. Skip the film, read the book.