Average rating: 4 out of 5 Stars 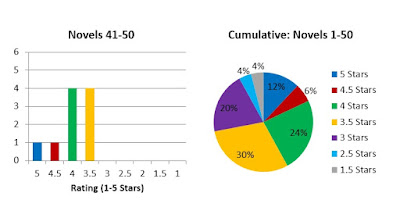 Best Hero/Heroine: Jessica from Dune. Paul Atreides is THE hero from Dune, but his mother Jessica is also heroic and I found her more likeable, and more admirable.

Most Villainous: Caligula from I, Claudius (no contest), but dishonorable mention to Uriah Heep from David Copperfield

Most interesting/Complex character: The Creature from Frankenstein

Best Quotation: A World is supported by four things…the learning of the wise, the justice of the great, the prayers of the righteous and the valor of the brave. But all of these are as nothing…without a ruler who knows the art of ruling

Best Subtitle: The Modern Prometheus (subtitle for Frankenstein) I have to mention the subtitle to David Copperfield which isn't really a subtitle, but the full title: The Personal History, Adventures, Experience and Observation of David Copperfield the Younger of Blunderstone Rookery (Which He Never Meant to Publish on Any Account)