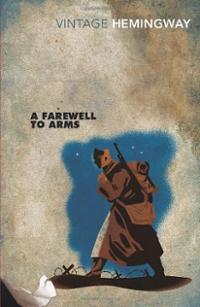 This is the first time I’ve read A Farewell to Arms and the third I’ve read by Hemingway. A Farwell to Arms is a modernist novel, first-person narrative of Lieutenant (Tenente) Frederic Henry, an American serving in the ambulance corps of the Italian Army during WWI.  Of course, it was not known as WWI at the time, but rather the War to End War. The Tenente falls in love with a British nurse, Catherine (Cat) Barkley. So, it’s a war story and a love story – or more precisely, the story of lovers trying to escape war. It’s also very depressing. If you saw the movie The Silver Linings Playbook you already knew that.

In spite of it being depressing, I found it quite engaging. A shocking review thus far, no? A war story that is depressing and a Hemingway novel that is engaging. To avoid further spoilers…

After some preliminary narrative to develop setting, characters, and the love story, Tenente Henry is badly injured and most of his crew killed by a mortar blast. He is taken to a hospital well away from the fighting and Catherine is transferred to work in the same hospital, thus allowing their love to grow. After major surgery to repair his knee and a long recuperation, Henry is sent back to the front, just in time to take place in a massive Italian retreat. In the chaos, a group of self-imposed Battle Police, “arrest” retreating officers, and summarily execute them for the shame they have brought upon Italy. Even though he is American, Henry is arrested and will likely be executed, but he makes a daring escape. During his flight he decides he is finished with the war – hence the title. He eventually finds Catherine and the two spend several relaxing days as if they haven’t a care in the world. Henry learns that the authorities have discovered his whereabouts, and intend to arrest him. Fortunately, Henry and Catherine were staying on the Italian-Swiss border, so they plan a sudden and daring escape: An all-night rowboat trip across the lake into Switzerland. Oh and by the way, Catherine is several months pregnant. I’ll spare further spoilers and let you read it yourself. It’s worth a read.

I liked this much more than The Sun Also Rises, but not as much as For Whom the Bell Tolls. I only had one complaint. The love dialogue between Catherine and Henry is so cloying as to be unbelievable, such as this exchange, with Catherine speaking first:

Oh, darling, I want you so much I want to be you too.

You are, We’re the same one.
I know it. At night we are.
The nights are grand.
I want us to be all mixed up. I don’t want you to go away. I just said that. You go if you want to. But hurry right back. Why darling, I don’t live at all when I’m not with you.
I won’t ever go away, I said.
I’m not good when you’re not there. I haven’t any life at all.
I want you to have a life. I want you to have a fine life. But we’ll have it together, won’t we?

There was one other complaint I might have had. As a veteran myself, I would have been prepared to dislike this novel, for the soldier deserting his unit and duty, but the arrogance and idiocy of the Battle Police made Tenente Henry’s decision perfectly reasonable.

Hemingway served, and was injured in the Italian ambulance corps, and he did fall in love with a nurse, but that’s about as far as the similarities go. I don’t think it would be accurate to call this autobiographical, or even semi-autobiographical. It was just Hemingway doing what writers are always admonished to do – writing about what he knew.

In the end, like the character in The Silver Linings Playbook, I wondered what was the point? Just a theory, but pointlessness may have been the point. Of all the stupid wars, WWI was one of the stupidest. Frederic and Catherine were caught up, in a war that just sort of got caught up, drawn out, and badly concluded by circumstance.

Film Rendition: Starring Gary Cooper and Helen Hayes. To be honest, I thought this was awful. Hemingway reportedly hated it as well. Skip the movie, read the book.