American Pastoral by Philip Roth (63 down 37 to go) 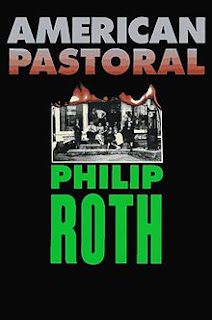 You’re craving depths that don’t exist. This guy is the embodiment of nothing. I was wrong. Never more mistaken about anyone in my life. ~ Nathan Zuckerman’s thoughts regarding Seymour “Swede” Levov

This is the first time I’ve read American Pastoral or Philip Roth. American Pastoral is a post-modern novel, one of the more contemporary on my list, published in 1997, and winner of the Pulitzer Prize in 1998. It is the story of an all American boy and the American dream.

This novel satisfies square O1 of 2015 Classics BINGO: Literary Prize of My Country

The story begins in 1995 with Nathan Zuckerman attending his 45 year high school reunion. Zuckerman appears in several of Roth’s novels and is an apparent alter-ego, as Zuckerman is also a published author. Zuckerman, the Swede’s brother Jerry Levov, and other classmates naturally reminisce and through them the reader learns of the legend of Seymour “Swede” Levov and his mystique. The high school and community in Newark, New Jersey, is predominantly Jewish, including The Swede who earned the nickname by his uncharacteristic blonde hair.

Seymour Levov, known as Swede to his friends and neighbors, is a three sport hero in high school, destined for greatness. He is admired by everyone and seems on a fast track to the American dream, or quiet, comfortable, American Pastoral until his only child commits the unimaginable and plunges Swede into the indigenous American berserk.

Swede is quiet and unassuming. He is a pro-prospect in baseball, but shortly after graduating in 1945, he eagerly does his duty by joining the Marine Corps. This is the Swede’s life. He does the right thing, the admirable thing, the expected thing, and continues to win everyone’s respect and admiration. The respectable life seems to be the one driving force in Seymour’s life.

After Zuckerman frames the story at the reunion, Roth switches to an omniscient narrator and flashes back to narrate the Swede’s life, also using a good deal of stream of consciousness by Swede and other characters. After his stint in the Marines, the Swede enters his father’s successful glove manufacturing business. The business thrives, Swede becomes rich, marries Miss New Jersey, buys a stone house in the country, has a daughter, and is living a perfect pastoral life.

But then a few threads in the exquisite tapestry begin to unravel. His daughter Merry develops a stutter and grows obese. A bit inconsistent with the façade, but nothing the unassailable Swede feels will not be overcome. And then, Merry becomes increasing belligerent, rebellious, and even hostile in her disgust with American involvement in Vietnam. Again, exasperating to the Swede, but likely just a phase.

How could their innocent foibles add up to this human being?

The daughter who transports him out of the longed for American pastoral and into everything that is its antithesis and its enemy, into the fury, the violence, and the desperation of the counterpastoral – into the

I felt bad for the poor guy. I’m rather a straight and narrow sort myself and could sympathize when it all unraveled. He kept looking for answers, what he did wrong, what his wife did wrong – and for the most part coming up with nothing.

And – in my opinion – nothing did explain it. They weren’t perfect parents, but they did the best they knew. At some point, kids will make their own life, for good or for bad.

At the very end of the novel, the Swede and his wife host a dinner party, still trying to reclaim the pastoral.  The guests include Swede's parents and several friends. It falls on the very day Swede encounters his fugitive daughter for the first time in years. She is living in squalor, but a life of her own choosing. He tells no one at the party, puts on a respectable façade, and learns of yet more human folly in his loved ones. He wonders:

What kind of mask is everyone wearing?

He had been cracking up in the only way he knew how, which is not really cracking up at all but sinking, all evening long being unmade by steadily sinking under the weight. A man who never goes full out and explodes, who only sinks…

This is a complex novel with numerous themes: The American Dream, the Jewish-American pathos, blended families (Jewish and Catholic in this case), anti-war activism, respectability, and the “sub-stratum of the mind”. It’s a bit depressing, but also a keen insight.

There are a few pages that would be rated R, though most of the book is PG-13.

Perhaps by definition a neighborhood is the place to which a child spontaneously gives undivided attention…
One price you pay for being taken for a god is the unabated dreaminess of your acolytes.
He had learned the worst lesson that life can teach – that it makes no sense.

References to other classic literature:  Zuckerman quotes Tolstoy and The Brothers Karamazov, and later the narrative refers to a minor character as having escaped his Dostoyevskian family.  I guess Roth likes the Russian authors.

One last excerpt that particularly amused me, and came with an odd experience of synchronicity.

At the dinner party, Swede’s father, who is outspoken and opinionated, possibly a bit senile, and who usually turns every discussion to the glove manufacturing trade, describes Jackie Kennedy:

At the very instant I was reading this, I was on a treadmill at the gym. The treadmills have TVs, but I wasn’t watching, obviously because I was reading. But when I glanced up briefly to turn the page, who was on the TV but the exquisite Jackie Kennedy. I had the sound muted, so I don’t know what was said, but it was a news channel, and the story was definitely more about Jackie than President Kennedy, and I’m fairly certain it had something to do with her impeccable taste. She wore gloves in the news footage.

Film Rendition: 2016 with starring Ewan MacGregor is pretty good, and pretty faithful. It didn't do well at the box office though.
.
Posted by Joseph at 10:12 PM