It’s college football rivalry weekend. The only one I care about is the University of Michigan vs Ohio State University.

There are two schools of thought when it comes to trash talk: wait until after the game when you know the outcome, this is also the coward’s way, or lay it on thick before the contest. There is a risk of course, but I’ve already eaten Turkey this week; I can eat crow if I have to. 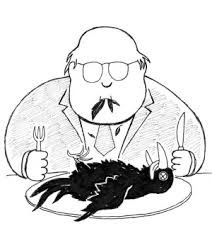 Feel free to ignore the rest of the post.

So, herein follows my trash talking.

Recently I was enjoying some lively banter with a colleague who, although he is otherwise a swell human being, happens to be a Buckeye. I pointed out to him that if OSU wins the next 12 straight the series will be tied. He made a rather ignorant comment, that in recent history, which he defined as since the inception of the forward pass, the series is not even close.

This simply isn't true either literally, or in what he was implying.

Literally, the series IS close since the forward pass, but still in favor of Michigan, thus refuting his implication. Unwilling to let his little delusion go uncorrected I compiled a few FACTS for him. There's a bit here for deluded Notre Dame fans as well. Feel free to pass it along.

Few more FACTS:
OSU did not score a single point for the first five meetings.
Combined score of the first 15 meetings: 369-21.
OSU is the clear leader in most Vacated Wins (PC for stripped of the win for cheating): OSU 12 vacated wins, 1 against UofM). UofM ZERO vacated wins against any team, ever.

The University of Michigan is the Winningest NCAA Football program of all time with 919 wins. Some might argue it is Notre Dame because their win percentage .732, is slightly better than UofM's .730 (which are #1 and #2)....BUT UofM has a winning record against Notre Dame is 24-17-1. We can't really help it if the rest of the NCAA lets Notre Dame beat up on em.

OSU is 3-2 vs Notre Dame by the way, and we appreciate that. OSU does not play Notre Dame nearly as often, as they try to avoid ranked teams in their non-conference games.

After initially compiling these stats, another deluded Buckeye commented that if going back to the 1900s made me feel better…OK.

Not really…but going back to FOREVER does.