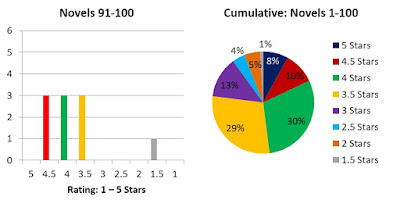 Least Favorite: Remembrance of Things Past

Best Villain: Randall Flagg from The Stand
Dishonorable mention: Not a villain, just ughhh! Kenneth Widmerpol from A Dance to the Music of Time

Best Quotation: I do think that families are the most beautiful things in all the world! ~ Jo March from Little Women

Best Subtitle: No subtitles in the group, but Remembrance of Things Past is alternately titled In Search of Lost Time

Worst film adaptation: 2005 The Hitchhiker’s Guide to the Galaxy (though, I believe the quirkiness of this satirical Sci-fi comedy would be extremely difficult to capture adequately in a two-hour film).