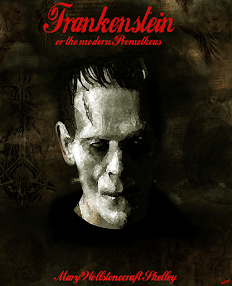 Frightful must it be; for supremely frightful would be the effect of any human endeavor to mock the stupendous mechanism of the Creator of the world. ~ Mary Shelley on Frankenstein

This is the second time I’ve read Frankenstein, the first being some years ago. I think it is most commonly considered a Horror Story, but it also has elements of Sci-Fi and Fantasy, written and published in the Romantic period of literature. It is the first-person narrative of Victor Frankenstein a young scientist (not mad), his obsession with creating life, his horror at his creation, and the great calamity that befalls him for playing God.

This novel satisfies square I1 of 2015 Classics Bingo: Published before 1850.

Frankenstein is the most disappointing novel I have read thus far, not because it fell short of my expectations, but because I think it is a magnificent story, badly told.

I think the great conflict in Frankenstein is one of the most compelling in literature. For that, I give Shelley high marks. The story of how she came up with the plot is almost too good to be true…while staying at a Swiss chalet with poet and future husband Percy Shelley, the renowned English poet Lord Byron, and English author John Polidori, incessant rains kept them indoors and boredom drove them to share ghost stories. Someone issued a challenge for each member of the party to invent a new story. It would have been fun to eavesdrop on that party.

You are probably familiar with the premise of Frankenstein, though the novel is quite different from most movie versions. The creature does not immediately traumatize the village, in fact he never really does. Victor Frankenstein loathes his creation almost the very moment he brings it to life. Shortly thereafter the Creature flees to locations unknown, and Victor returns to family and friends almost forgetting what he has done. The Creature is highly intelligent and through some extraordinary circumstances teaches himself to speak, read and write, and something about the nature of man. He is gentle and good, but so hideous he evokes fear and hatred from any human he encounters. He accidentally kills a child, who happens to be Victor’s brother. The Creature seeks Victor out and demands a female companion, or he vows everlasting rage and terror. Victor agrees hoping it will free him from malignity of the Creature, but later repents, and breaks his vow. The rest of the story is the Creature exacting revenge against his creator.

My problem is the many shortcuts Shelley takes in telling the tale. The first is Victor’s discovery of the secret to creating life. It isn’t explained and barely takes a paragraph to proclaim that he has discovered it…from reading books. He doesn’t test it on simpler creations, and he proceeds as if there is absolutely no doubt of success. He assembles a body and brings it to life. No fantastic storm, no lightning bolt, he simply brings it to life. Now I realize she couldn’t truly explain how he did it, because it cannot be done, but even in fantasy there is generally some explanation. If this were the only “shortcut” I might forgive it. But there are MANY more.

Twice the creature just finds things lying out in the woods that are critical to his survival and development. One is a satchel of books, that teach him the nature and history of humanity…just found them…out in the woods.

Really? Couldn’t come up with something a bit more creative?

But the most regrettable “shortcut” to me was the transformation of Victor. Before animating the Creature, Victor is obsessed. Once he brings it to life he immediately loathes it. I think this change was a brilliant development…but I dearly would have liked to have it develop. The mortal man, a creation himself, exultant over the immensity of his discovery, who then slowly realizes what an aberration and blasphemy he has created.

But no! One minute drunk with anticipation, the next minute, I hate that thing.

I still liked Frankenstein because the plot is so compelling, but I believe the brilliant story could have been told so much better. If Mary Shelley had only taken a page from Herman Melville’s book, pardon the pun, and added more detail, and Melville had in turn learned from Shelley and not included so much detail, I think Frankenstein and Moby Dick would have been two of my favorites. Or maybe I’d detest my hybrid creation.

Still, Frankenstein reminds me of Moby Dick: the mad obsessions of Dr. Frankenstein and Ahab have distinct similarities and are the ruin of both.

…how much happier that man is who believes his native town to be the world, than he who aspires to become greater than his nature will allow. ~ Victor Frankenstein
My person was hideous, and my stature gigantic: what did this mean? Who was I? What was I? Whence did I come? What was my destination? These questions continually recurred, but I was unable to solve them. ~ The Creature
I remembered Adam’s supplication to his Creator; but where was mine? He had abandoned me, and, in the bitterness of my heart, I cursed him. ~ The Creature

Three books the Creature finds that educate him to the nature of man:
Paradise Lost by John Milton
Plutarch’s Lives by Plutarch
Sorrows of the Werter by Von Goethe

Film Renditions:  Prior to reading the novel, I was only familiar with the 1931 film with Boris Karloff as the creature; it’s a classic, and must see for all horror movie fans, but NOTHING like the book. There are numerous other versions to choose from, but most seem to be more influenced by the 1931 film than the book, and are therefore the worst of both worlds. However, the 1994 version, appropriately titled Mary Shelley’s Frankenstein (implying other film versions are not Mary Shelley’s conception), is true to the book….for about 75% of the movie. For the first 90 minutes I was loving it, believing it to be one of those rare films that actually improved on the book. Without contradicting Shelley’s story, the film filled in some of the “shortcuts” that I complained of. But then, for the final few scenes, the director and/or screenwriter decided they had a better vision than Shelley. So, I can’t give it quite the praise I was prepared to, but it is the most faithful adaptation that I am aware of. Kenneth Branagh as Frankenstein, Helena Bonham Carter as Elizabeth, and Robert De Niro as the creature were all marvelous. There is another version I can recommend…just for fun. The 1974, Mel Brook’s film, Young Frankenstein is a ridiculous spoof and good for a laugh.