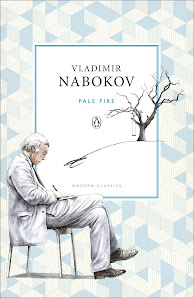 I was the shadow of the waxwing slain ~ Opening line of a 999-line poem titled "Pale Fire", which is central to the novel Pale Fire.
This is the first time I’ve read Pale Fire. I previously started, and did not finish, a different novel by Nabokov, so this is the first by Vladimir Nabokov I have finished. Pale Fire is a postmodern novel employing metafiction, in the form of a 999-line poem also titled Pale Fire.
My rating: 4 of 5 stars

This is a unique and complex novel. In attempting to simplify, I will likely only confuse. But it is my task, per my quest, so I shall try. At first I thought this was not a novel at all, but a poem. Upon completion, I realized that combined, the foreword, the poem, and the commentary tell a story in a unique way, or metafiction. As such, it is indeed novel in the most literal sense. In fact, you could argue it is the only novel, or at least the most novel of any of the novels I have read.
Not very clear, is it? The story told by Pale Fire is only realized by reading the foreword, and the poem, and the commentary. The foreword is not a real foreword, but a fictional foreword by the fictional character Dr. Charles Kinbote, a colleague and friend John Shade, the fictional author of the poem. After the poem, the fictional Kinbote offers fictional commentary on the fictional poem, by the fictional author Shade. All three parts are actually the fictional creation of Nabokov.
And a brilliant creation. I didn’t like Pale Fire at first, or even in the middle, but almost with the very last line of the commentary, it all became clear and I was stunned. Truly the most novel novel I’ve read.
This novel satisfies square G5 of 2015 Classics Bingo: Published 1950-1999
I’d like to offer a recommendation on how to read Pale Fire. Read the poem first in entirety, it is written in four cantos. It is quite clever, and small passages make sense of a limited scene or impression, but you will probably not sense a single congruous tale. Next read the foreword. Then read commentary that pertains to Canto One, and then reread Canto One. Do the same for Canto Two, Three and Four, and then reread the entire poem.
And you’ll have the whole story. The story of an exiled King living incognito as a professor at an American University, of the King’s childhood, the revolution, his escape, and the assassin sent to track him down.
A bit more about the poem: it rhymes. It’s a bit old fashioned, but I still like poetry that rhymes.
Excerpt:
One ear in Italy, one eye in Spain,
In caves, my blood, and in the stars, my brain
Also, 999 lines might seem like an untidy number. The poem is unfinished as the meter is incomplete; line 999 does not have a corresponding rhyme. Kinbote realizes the first line is also the last line, or line 1000. The poem tells the tale of the exiled King, but as Kinbote puts it (and note the play on the Novel/Poem’s title), it tells the tale with:

Echoes and wavelets of fire, and pale phosphorescent hints,...

The author, Shade, also wrote parts with apparent precognition of events yet to come.
Lastly, a word about the title. There is an amusing bit of irony in the commentary, where Kinbote expresses his disdain for the technique of deriving titles from some other poetic work.

See Browning’s My Last Duchess. See it and condemn the fashionable device of entitling a collection of essays or a volume of poetry – or a long poem, alas – with a phrase lifted from a more or less celebrated poetical work of the past. Such title possess a specious glamor acceptable maybe in the names of vintage wines and plump courtesans but only degrading to the talent that substitutes the easy allusiveness of literacy for original fancy and shifts onto a bust’s shoulders the responsibility for ornateness since anybody can flip through a Midsummer-Night’s Dream or Romeo and Juliet, or, perhaps, the Sonnets and take his pick.

The irony is that the title Pale Fire is from Shakespeare's Timon of Athens.

The moon's an arrant thief,  And her pale fire she snatches from the sun (Timon of Athens, Act IV, scene 3).

I'm certain it was intentional.
Excerpts from the commentary:

The summer night was starless and stirless, with distant spasms of silent lightning.
Vainly does one look in Pale Fire (oh, pale, indeed!) for the warmth of my hand gripping yours, poor Shade!
All the seven deadly sins are peccadilloes but without three of them, Pride, Lust and Sloth, poetry might never have been born.
Let me close this important note with a rather anti-Darwinian aphorism: The one who kills is ALWAYS his victim’s inferior.

Kings do not die – they only disappear, eh, Charles?
…kinbote means regicide in your language? Asked my dear Shade.
Yes a king’s destroyer, I said (longing to explain that a king who sinks his identity in the mirror of exile is in a sense just that).