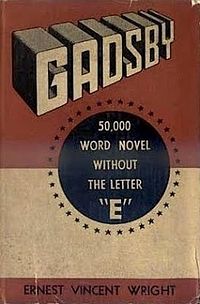 Gadsby by Ernest Vincent Wright is a novel of over 50,000 words, not once using the letter “E”.  This is known as a lipogram: a written work where the author constrains themselves, usually by omitting some specific letter. There have been many lipograms by many authors, most of them either omitting a less essential letter, or omitting “E” in a FAR shorter work. A full novel lipogram omitting “E” was considered impossible. Wright accomplished this feat – to prove it could be done. In tribute, I will attempt a single paragraph of review without the letter "E".

Gadsby is a story of "Youth's Champion", John Gadsby. Commit no fault and think this is that famous story of Jay Gatsby; it is not. Gadsby is a man, a visionary, who knows his small town of Branton Hills is a tiny burg without ambition or distinction, for lack of vision. Gadsby thinks on many obstructions and knows his first shot is with Branton Hills’ youth. Gadsby forms a Youth Organization and drafts local youths as assistants to bring about all sorts of civic growth: a library, hospital, city park, zoo, night school, airport, and on and on. Branton Hills blooms to a modish city and a paragon of civic growth, with Gadsby as its mayor. It is a happy story with not many villains. As a story, it is only so-so, but I must applaud its author for an astonishing victory.

That was difficult. As I’ve stated, the story is nothing to rave about. It was sweet, a bit too sweet for my taste. Gadsby met some opposition, but generally everything turned out rather perfectly.

But the story itself is secondary to the amazing accomplishment. This novel is not part of my Greatest Novels Quest, it is just something I have wanted to read since I first learned of it some years ago on Jeopardy. In spite of the most extreme constraint, the story flows quite well most of the time. There were occasional passages, where a word such as “kids” was substituted for what would flowed much more naturally with “children”, but still…amazing.

The introduction by the author was quite interesting. He explains some of the difficulties, beyond the most obvious – no “the” allowed. He could also use very few past tense verbs, and no number between six and thirty. He also did not use any contraction where the full word contained an “E” such as “Mr.” for “Mister”. Wright faced skeptics and critics that were utterly ridiculous. Some claimed he failed because his name, the author’s name, contains the forbidden letter, and others pointed out that “chapter” also contains an “E”. Not that it is a valid dispute, but Wright did not use the word chapter, but used roman numerals to divide the text. One critic called him a “genuine fraud” which Wright pointed out was a most interesting paradox, and then committed his own by claiming to have accomplished the impossible.

This was not part of my original 100 Greatest Novels Quest. I am designating it novel #101

I give it 4 Stars for the extraordinary achievement.

A few excerpts to demonstrate how Wright improvised to comply with his self-imposed constraint:

“You know that good old yarn” said Gadsby, “about making so good a rat-trap that millions will tramp down your grass in making a path to your front door.
(If you build a better mousetrap the world will beat a path to your door)
…music truly “hath charms to calm a wild bosom.”
(Music hath charms to soothe the savage beast.)
…by substituting outwards for inwards.
(inside out)
I wish I could call this grand church affair by its common, customary nomination, but that word can’t possibly crowd into this story. It must pass simply as church ritual.
(wedding and/or marriage)
Also, last night, at a big “so sorry, old chap” party.
(bachelor party)

I don’t expect there has been or will be a film rendition.