I finished the One Year Chronological Bible this morning. I have no intention of reviewing the Bible, but I will comment on the arrangement in this version. The traditional Bible is not arranged chronologically. This version attempts to put things into chronological order. 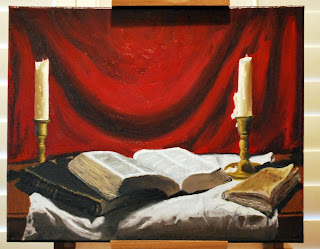 For instance, the books of I Kings and II Kings are historical accounts of the Kings of Judah and Israel. Most of the prophetic books, such as Isaiah, Jeremiah, etc. were written during the same periods, and in fact many of the prophecies were intended for the reigning King. The chronological Bible, interjects those prophetic passages into the corresponding historical passages in I and II Kings.


Similarly, in the New Testament, the epistles (letters) of the apostles, Paul, Peter, John, etc, are interjected into The book of the Acts, which is the historical record of the first century church.


It is a bit cumbersome at times due to redundant historical records of Samuel, Kings, and Chronicles, as well as the four Gospels. In the chronological Bible, you may read of a single event, two, three, or even four times in succession as told by Matthew, Mark, Luke, or John, before moving onto the next event.


So it doesn’t always flow well, but it was still interesting to read things in chronological order. It also divides it up nicely into 365 sections, so you can easily read the entire Bible in a year.


I am a lifelong student of the Bible. I’ve read it numerous times before, and I’ll read it again. As I stated in the beginning, I don’t intend to review it. I’ll offer something that someone else has written about the Bible. I cannot cite the author, but this is from the inside cover of a small Bible, that a Gideon missionary handed to me as I went off to war.


*snicker* I’m exaggerating greatly. It was actually, when I was herded off to basic training with several hundred other scared and excited young men.


But again, from the inside cover of my Gideon Bible:


The Bible contains the mind of God, the state of man, the way of salvation, the doom of sinners, and the happiness of believers. Its doctrines are holy, its precepts are binding, its histories are true, and its decisions are immutable. Read it to be wise, believe it to be safe, and practice it to be holy. It contains light to direct you, food to support you, and comfort to cheer you.


It is the traveler’s map, the pilgrim’s staff, the pilot’s compass, the soldier’s sword, and the Christian’s charter. Here Paradise is restored, Heaven opened, and the gates of Hell disclosed.

Christ is its grand subject, our good the design, and the glory of God its end.


It should fill the memory, rule the heart, and guide the feet. Read it slowly, frequently, and prayerfully. It is a mine of wealth, a paradise of glory, and a river of pleasure. It is given you in life, will be opened at the judgment, and be remembered forever. It involves the highest responsibility, will reward the greatest labor, and will condemn all who trifle with its sacred contents.
Posted by Joseph at 8:10 AM