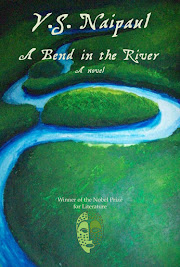 I could no longer submit to Fate. My wish was not to be good, in the way of our tradition, but to make good. ~ Salim

This is the first time I’ve read A Bend in the River or V.S. Naipaul. The book is a post-modern novel set in Africa in the early to mid 1960s.  It is the first-person narrative of Salim, an ethnic Indian Muslim and lifelong resident of Africa.

This novel satisfies square B3 of 2015 Classics BINGO Classic of Africa. This completes the 2015 Classics Bingo challenge, as I have completely blacked out the Classic Bingo card.

Salim grew up in an unnamed East African country, but in his early twenties, he buys a small business in an unnamed country in the interior, in an unnamed town – identified only as being at the bend in the river. He buys the business on the cheap, as the country has recently been through a violent revolution that wasn’t good for anyone except of course the new powers that be. There is relative peace and stability now, so Salim hopes the fortunes will turn and the town at the bend in the river will flourish as it did before the revolution.

And for a while, it does. But then, well then post-colonial Africa happens.

I’m not going to say much more. Naipaul’s writing is superb and his characters are all marvelously flawed – perfectly believable.

But I didn’t really care for this novel much, though I may very well be biased. Out of respect to a living author, I’ll just say, that based on what I’ve read about V.S. Naipaul, I don’t care for him much. It's quite possible that tainted my opinion of his novel.

Speaking of bias, I had a very distinct feeling that Naipaul’s narrative about Africa is not completely reliable. I’m no historian, and a historian of Africa even less, so on most points I must defer to Naipaul’s knowledge, but I reserve the right to be a bit dubious about an indistinct ethos he creates.

Meh – sounds like rubbish. I just didn’t care much for this novel, but I definitely wouldn’t recommend against it.

Excerpts (all thoughts or words of Salim):

Even hypochondriacs sometimes have real illnesses.

But what had happened was not new. People who had grown feeble had been physically destroyed. That, in Africa was not new; it was the oldest law of the land.

When we wanted to speak of the doers and makers and the inventors, we all – whatever our race – said “they.” We separated these men from their groups and countries and in this way attached them to ourselves.

But the airplane is a wonderful thing. You are still in one place when you arrive at the other. The airplane is faster than the heart.