Something Wicked This Way Comes by Ray Bradbury (novel #158) 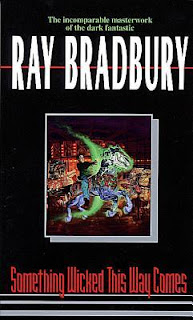 “Three A.M. That’s our reward. Three in the morn. The Soul’s midnight. The tide goes out, the soul ebbs. And a train arrives at an hour of despair…Why?”

You might guess from the title, Something Wicked This Way Comes is a horror story. Some have called it dark fantasy, but nah…I think it’s horror. I read this once before, when I was 13, the age of the two protagonists, growing up in mid-America as they were, in the 60s, and 70s as they did. Very likely, all this empathy caused me to share their terror. I didn’t remember much of this story, but I remembered that it terrified me.

In a wonderful way.

And that was the October week when they grew up overnight, and were never so young anymore.

Will was born a minute before midnight, October 31, Jim a minute after.

But it is at 3 A.M – the soul’s midnight – on October 23rd, nearly 14 years later when Jim and Will are beckoned by a train whistle. We’ve all heard that romantic, far off train in the night…

Yet this train’s whistle! The wails of a lifetime where gathered in it from the other nights in other slumbering years; the howl of moon-dreamed dogs, the seep of river-cold winds through January porch screens which stopped the blood, a thousand fire sirens weeping, or worse! the outgone shreds of breath, the protests of a billion people dead or dying, not wanting to be dead, their groans, their sighs, burst over the earth!

Unable to resist the call, Will and Jim climb out their windows to investigate the arrival of Coogar and Dark’s Pandemonium Shadow Show.

It is subtly terrifying. I’m not frightened by grotesque monsters. It is those things supposed to be harmless: a clown – but just a little off, an old woman, appearing kindly and gentle – but perhaps a witch, or in this case, a carnival that should be wondrous – but which comes at an odd time, in the wrong season, that terrify me in a quiet unspeakable way, with their secret malevolence.

Even the title is subtle. It is taken from Shakespeare’s Macbeth, a line uttered by the Weird Sisters (never expressly called witches in the play)

By the pricking of my thumbs,

Something wicked this way comes.

Besides his wonderful, subtle, terrifying words, I love Bradbury’s writing. It is romantic, poetically descriptive, mysteriously vague, brief and poignant. Such as Will’s dad, Charles Halloway, observing the boys chasing the wind in the innocence of youth…

He knew what the wind was doing to them, where it was taking them, to all the secret places that were never so secret again in life.

I particularly love the allusion in this next line when Charles, who works in the library, marks his son, perusing its wonders…

So, looking back down the corridor, was Dad shocked to see he owned a son who visited this separate 20,000-fathoms-deep world?

Or this…Chapter 31 quoted in its entirety:

Nothing much else happened, all the rest of that night.

Or one last excerpt, that I cannot put in context without a spoiler, but the context is not necessary to enjoy the beauty of the words describing father and son in a moment of playfulness:

He got half over Dad when they fell, rolled in the grass, all hoot-owl and donkey, all brass and cymbal as it must have been the first year of Creation, and Joy not yet thrown from the Garden.

And besides all this, I think there are powerful truths tucked away in the pages of this fantasy. “Be careful what you wish for” is one, but more importantly, the sometimes-fine line between evil and good. Every evil that has been invented is a perversion of some good gift of the creator; every desire in the heart of man has a righteous venue, and an indulgent aberration. I think Bradbury was warning us that evil ones will tempt us with subtle lies, just as when Joy was thrown from the garden.

I read this for the R.I.P. XV challenge – scary reads for September and October.