The House on the Borderland by William Hope Hodgson (novel #159) 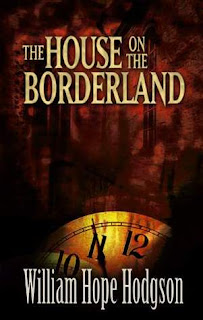 The House on the Borderland is a supernatural horror novel, set in Ireland. It begins in very early 20th Century when a pair of fishermen, discover a few scant remains of “The House” and a journal. The bulk of the novel then is the journals content, set in probably the very early 19th Century, told by a recluse who inhabited the house.

The unnamed narrator buys the house for a song, owing to its mysterious and sinister legend. He lives with his spinster sister and dog Pepper. Shortly after inhabiting the house he begins to experience bizarre visions – perhaps hallucinations – but eventually, the fantastic manifestations leave unmistakable physical evidence. He is at times, transported through time and space, to the extremes of the cosmos. He encounters the spiritual presence of a long-lost love, and does battle with a herd of intelligent, but clearly malevolent swine-creatures.

I was looking forward to this read, as it was quite unknown to me and somewhat obscure to modern readers. I was quite disappointed. It was at times, riveting when I was scared for the narrator’s life, but overall I felt it was just a series of amazing events, leading to an amazing culmination, without a cohesive point.

But don’t take my word for it. Smarter readers I love it, including H. P. Lovecraft and Terry Pratchett. Have you read The House on the Borderland? What did you think?

I read this for the R.I.P. XV challenge – scary reads for September and October. It also satisfied square I5: Classic Gothic or Horror 2020 Classic Bingo Challenge.