Occasionally I take a short detour from the standard bookish content of this blog. (That’s foreshadowing; I’m about to take such a detour.)

The Kentucky Derby is known as “The most exciting two minutes in Sports” which is a bit of a misnomer. Three horses have run the race in less than two minutes, and one of them didn’t even win. In 1973, the great Secretariat set the standing record of 1:59.4, just ahead of Sham who was also under two minutes. In 2001, Monarchos finished at 1:59.97.

Before I get to this year’s Derby, I want to talk about the Kentucky Oaks – the ladies’ (fillies) version of the Kentucky Derby. Fillies can run in the Derby, but usually don’t. Only three fillies have won the Derby: Winning Colors, Genuine Risk, and Regret. This year, the filly Swiss Skydiver qualified for the Derby, but her owner and trainer opted for the Oaks, which is run the day before the Derby. The Kentucky Oaks is for three-year-old fillies (filly is a female 3 and under, at age 4 they are fully mature and are known as mares). The Oaks will probably come down to a two-horse race between Swiss Skydiver and Gamine. I expect Gamine to jump to the early lead, but Swiss Skydiver will be content to stay close behind, saving her speed for the end, when she pulls ahead in the homestretch for the win.

The Kentucky Derby doesn’t look like much of a contest. Tiz the Law will be the heavy favorite. If he wins, the talk of Triple Crown will begin. Tiz the Law already won the Belmont Stakes, and will then have to win the Preakness to claim the Triple Crown. The only horses that seem to have any chance against Tiz the Law are Honour A.P. and Authentic. Coincidentally, these three have post positions 16, 17, and 18, out of 18. This far outside positions mean they have a bit more ground to cover, but they also have a clear shot to the lead. They have slightly different styles. Honor A.P. likes to stay off the lead and close late. Authentic likes to take the lead from the very start, whereas Tiz the Law, stays off the pace for the first half, then takes the lead to pull away from the field the second half. I think it’s Tiz the Law’s race. However, there’s no money in picking the favorite. There is a long shot I like: Thousand Words (love the name), son of Pioneer of the Nile, grandson of Empire Maker, best trainer in the business Bob Baffert, and very capable jockey Geroux Flourent. With the exception of one bad showing a couple races ago, he has been improving each time out. I still doubt he can catch Tiz the Law, but the favorite usually doesn’t win the Derby, so I’m gonna take a chance on Thousand Words.

And since Thousand Words is worth a picture, here he is winning the Robert B. Lewis Stakes in February. 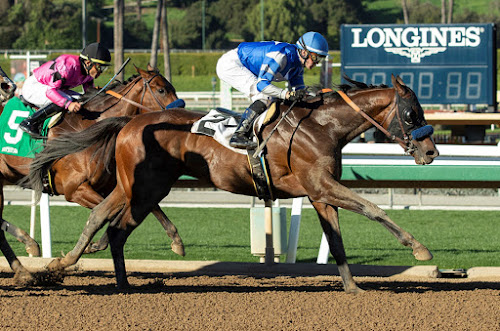 And to keep to the bookish topic of this blog, there is a poetry to thoroughbred racing. Consider these splendid names: Swiss Skydiver, Tempers Rising, Dream Marie (Oaks); and Finnick the Fierce, Storm the Court, Thousand Words, Winning Impression (Derby)

For all time beautiful names there are: Unbridled’s Song, Distorted Humor, Quality Road, Winning Colors….and the BEST EVER Sunday Silence.