The Hound of the Baskervilles – a Sherlock Holmes Novel (novel #160) 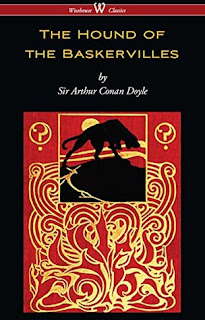 …in a modest way I have combated evil, but to take on the Father of Evil himself would, perhaps, be too ambitious a task. ~ Sherlock Holmes

The Hound of the Baskervilles, is one of four Holmes adventures long enough to qualify as a novel. Arranged chronologically it is his 20thcase. It is also perhaps, Holmes’ best known adventure.

I’ve mentioned before that the greatest pleasure in Holmes' adventures, is not the mystery, but rather the relationship and repartee between Holmes and Watson. That’s a bit lacking in this novel, as the two spend most of the story apart. However, there is still some fun dialogue, such as when Dr. Mortimer, a perspective client, comments on Holmes’ skull:

A cast of your skull, sir, until the original is available, would be an ornament to any anthropological museum. It is not my intention to be fulsome, but I confess that I covet your skull.

The case is unusual as it seems to portend a supernatural, or even demonic malign. Holmes, the man of science, is dubious, but unwilling to rule out the fantastic:

Holmes shrugged his shoulders. ‘I have hitherto confined my investigations to this world,’ said he. “in a modest way I have combated evil, but to take on the Father of Evil himself would, perhaps, be too ambitious a task.’

The Hound, is no ordinary hound. It is reputed to be of gigantic, impossible proportions, with eyes and breath of fire, and the legendary scourge of the family Baskerville. Legend, until recent developments cast suspicion on the Hell Hound for the death of Sir Charles Baskerville.

It is a marvelous mystery, that keeps the reader guessing. At a moment of revelation, Sherlock laughs, causing Watson to observe:

I have not heard him laugh often, and it has always boded ill to somebody.

By some standards, this is the best of Sherlock’s adventures. I wouldn’t rate it quite that high, but it was still great fun.

I read this for the R.I.P. XV challenge – scary reads for September and October. The challenge also allowed for mysteries, but I thought this Sherlock Holmes story doubly qualified – mystery and spooky.