Where the Red Fern Grows by Wilson Rawls (novel #157) 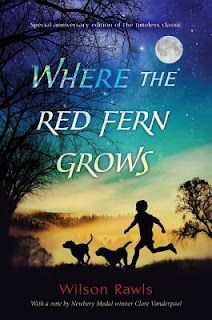 This was what I had prayed for, worked for, sweated for, my own little hounds bawling on the trail of a river coon.

Where the Red Fern Grows is the tale of Billy Colman and his obsession to first acquire a pair of hunting dogs, and then his love for his dogs and their passion for the hunt.

It begins when adult Billy rescues a stray redbone coonhound, which causes him to reminisce about Little Ann and Old Dan. Growing up in the Ozarks of Oklahoma, Billy longs for a pair of hunting dogs, but this is nearly impossible due to the poverty of his family. At night, he agonizes as he listens to coon dogs bawling on the hunt…

I’m sure if that coon hunter had known that he was slowly killing a ten-year-old boy, he would have put a muzzle on his hound.

But with the sincere and innocent prayers of a child, determination, hard work, and a little help from his grandpa, Billy raises the money he needs to mail order a pair of young hounds. After months of training, on the night of his first hunt, the dogs, Little Ann and Old Dan, scent a coon and the hunt is on…

This was what I had prayed for, worked for, sweated for, my own little hounds bawling on the trail of a river coon. I don’t know why I cried, but I did. While the tears rolled, I whooped again and again.

That first hunt nearly ends in failure as the dogs do their job by treeing the coon in a huge sycamore that will take days for Billy to cut down, in order for the dogs to finish the hunt. When Billy is nearly spent, ready to admit defeat, he says another prayer and a mighty wind finishes the job.

Before I left for home, I walked back to the sycamore tree. Once again, I said a prayer, but this time the words were different. I didn’t ask for a miracle. In every way a young boy could, I said “thanks.” My second prayer wasn’t just said with just words. All of my heart and soul was in it.

There are many more coon hunts. Billy and his dogs become a local legend, and eventually enter a national coon hunting contest.

No finer coon hounds could be found anywhere. They came from the Smoky Mountains of Tennessee, the bayou country of Louisiana, the Red River bottoms of Texas, and the flinty hills of the Ozarks.

I’ll spare the rest. You may hear this described as a coming of age tale, or a tale of the bond between a boy and his dogs. It is certainly both, but I believe it is something more. It is a tale of faith, of the shaking of a young boy’s faith, and how he comes through the other side.

If you are opposed to hunting, or squeamish, this book may not be for you. It was reminiscent of my own youth, when I would hunt, often just me and my beagle Duchess. It was rabbits for us, but I could still feel Billy’s joy when he was on the hunt with his dogs.

This novel satisfies square O3, Book published the year I was born, 1961 in the 2020 Classic Bingo Challenge and 20th Century Classic in the Back to the Classics Challenge 2020